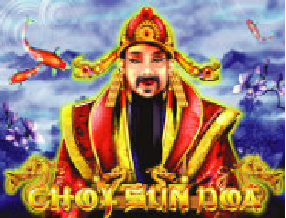 Play Choy Sun Doa for real with any of the following sites:

Choy Sun Doa means the God of Prosperity or Wealth and in line with its name, offers opportunities for big wins. Choy Sun Doa is  five-row and five-column reels. Each reel displays three symbols and there are 25 credits to play for all reels – giving you 243 lines to play.

The biggest wins come with 1000 credits and the 30 times multiplier. If playing risky is your style, you can choose the other option of 30,000 credits, but with five free spins only. The highs and lows of this slot both lie in one feature – the bonus rounds.

While you can choose to play “safe” with say 15 free spin games, certain other combinations of big multipliers could bring big money to your pockets.

The gold Ingot symbol on the the Choy Sun Doa is the scatter symbol, which triggers the bonus feature.  Choy Sun Doa – the central character is the wild symbol that replaces other symbols, other than the scatter symbol to create the winning combination. Choy appears only on the second, third and fourth reels to multiply wins during the bonus feature.

The bonus feature awards you with free games, but needs at least three gold Ingot symbols to get triggered. Symbols are matched left to right and pay all the time, not withstanding where they are placed on the reel.

If you hit three gold Ingots left to right, the slot provides you a choice of multipliers and the number of free games. When Choy appears on any of the reels two, three or four, he substitutes for other symbols to make a winning combination. This triggers the multiplier feature of the game.

The game allows you to re-trigger the free pokies plays bonus round within the bonus feature. Say you managed to trigger another free spins bonus round, while playing a bonus feature; Choy Sun Doa requires you to finish the current bonus round and then offers you another choice of potential multipliers with the number of free games.