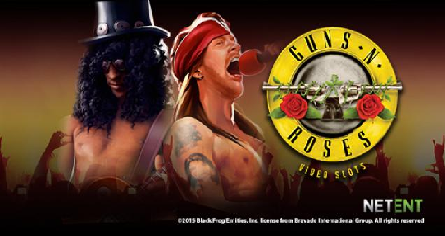 Play Guns N Roses for real with any of the following sites:

Guns N Roses is based on the popular Rock Band by similar name which was founded in Los Angeles in 1985. Developed into a pokies game by NetEnt it has awesome sounds and graphics and offers a host of impressive characters such as Axl Rose and Slash,

Guns N Roses Pokies with 5 Reels, 3 rows and 20 pay lines pokies is designed in an iconic GNR fashion, from icons on the reels which Guns N Roses are famous for and reflective of their history. Expect to see Album Covers, Music Videos and Band Members as well as the usual playing card symbols J, Q, K & A.

Guns N Roses has everything you’d expect from a rock themed video pokies. What’s really awesome is that you can choose your soundtrack when playing! This is a completely novel idea when playing online. You can choose from well known Guns N Roses hits: Welcome to the Jungle, November Rain, Paradise City, Sweet Child of Mine, Chinese Democracy.
This pokies is packed full of extra features, including Wilds, Multipliers and a wicked free spins game as well as a multi award bonus wheel, which can give off instant cash prizes or more features to help you win even more. You can play this pokies game with your mobile too.