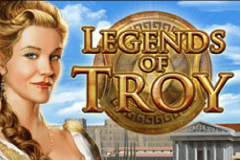 Play Legends of Troy for real with any of the following sites:

Legends of Troy is the wonderful historic slots that will spell out the story of the Trojan Horse and the Greek city of Troy in wonderful graphics and spinning reels of 5 reels 50 payline with 1024 ways to win. Developed by IGT this slot machine you can win a huge jackpot of 25 million coins while playing this game.

The wild symbol is a bronze shield which can appear stacked on the reels – it replaces all others except the Trojan Horse scatter which activates the main feature.

You can activate extra feature by clicking the plus feature button below the reels with all fifty lines played. It will double your stake but each wild which lands on the reels will now have a chance of awarding a cash prize as well as being a wild symbol. The value of the award increases from reels one to six with a maximum payout of 10000 coins.

There are some different symbols in use but the payouts are still the same; more spins can be awarded by once more landing three/four scatter symbols up to a maximum of 105 spins. The Scatter Bucks feature will be active during the free spins is you’ve chosen to play it in the base game.