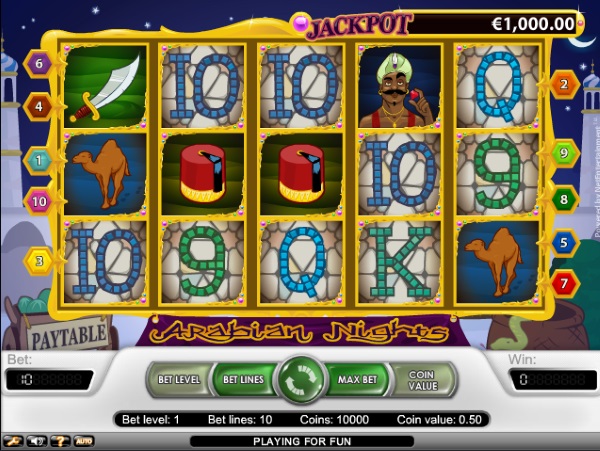 Play Arabian Nights for real with any of the following sites:

Arabian Nights is themed on 9th and 13th century where you will find yourself in the Arabian desert with Arab symbols and music. This pokies game is 5 reel, 10-line pokies featuring wild and scatter symbols along with the opportunity to win free bonus spins .

Offering progressive jackpot in this game you will find Mosaic tiles form the letters and numbers of high-ranking poker cards—9 to King—and other symbols include cartoonish Arabian objects such as a desert tent, a fez, a scimitar, a one-humped camel and a pair of curled-toe shoes.

The Wild symbol appears as a turbaned sultan holding up a sparkling red jewel while the Scatter symbol is a golden magic genie pot that sparkles and glistens whenever it appears on the screen.

Arabian Nights offers very basic settings, including a set coin value of .50 paired with just 10 bet lines, making it easy to play for play. Scatter symbols activate free spins, allowing players to win coins without the risk of losing anything. The progressive jackpot feature isn’t available when only playing for fun, but in other scenarios, it builds every time a player makes a bet. A portion of each bet is added to the jackpot until someone scores a line of five jackpot symbols appearing on a single activated bet line. This lucky player is then awarded the entire jackpot.