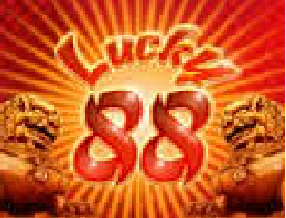 Play Lucky 88 for real with any of the following sites:

Lucky 88 revolves around the Chinese belief that 88 is the number for luck and fortune. The theme of the game, including the symbols on the reels, the music in the beginning, and even the fonts used in the game reflect the oriental style. The game has some interesting features such as multipliers, wilds, scatters and free games that improve your odds of winning by a good number.

In this 5-reel with 25 paylines pokies you will find that the interface of the game is pretty simple and easy to use. The game includes symbols reflecting the Chinese culture, such as golden lions, cranes, a Chinese drum, a pagoda, traditional Chinese lamps, and high card values A, K, Q, J, 10 and 9. A Chinese man in his traditional attire acts as the wild symbol and can replace all other symbols, except the red lantern scatter symbol, on the reels to form a winning combination.

The other symbol you would come across is a pair of dice, which triggers the bonus game. No background music is played during the game, but graphics and sounds make the screen active each time you win. Music is played through the free games feature.

The game has a wild symbol and a scatter symbol. The red lantern is the scatter symbol, which if appears three or more times on the reels, triggers the free game bonus. The bonus can be free spins or a game of dice, whichever the player opts for. You can get up as many as 25 free spins in one go. The game allows the players to make a strategic choice, leaving it up to them to improve the odds for winning. Options you get during the free bonus round include

25 free spins, where the win is multiplied by 5 or 18 in case a wild appears on the winning payline