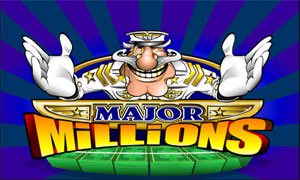 Play Major Millions for real with any of the following sites:

The object of the game is to match up three to five symbols in a row. Each symbol has a different value, which is determined by the pay table. All the symbols of Major Millions are of a military theme including a tank, general, aircraft carrier, fighter jet, and binoculars.

The scatter symbols can appear on any payline and will increase your win by 3x, 5x, or 50x depending on how many scatters you land up to 5 per spin. The wild symbol can substitute for any symbol except for the scatter and when you land 5 wilds the max amount on a single payline you automatically win the top non-progressive jackpot prize of 8,000 coins.   Major Millions offers quick spin and regular and expert mode feature.

Play with a fixed bet size of  $20. You can choose between 1 and 15 paylines, however the progressive jackpot can only be activated on the last payline, so playing max lines at all times seem good.

Like most pokies five exact symbol on a payline pays out, with five binoculars paying out 80 coins and Major Millions the most to 8000 coins. When you land 3 or more scatter symbols your winnings are multiplied by 3x to 50x. The major millions symbol also serves as a wild symbol and can be used to complete any payline.

Major Millions offers a progressive jackpot that is valued from $250,000 – $1,000,000. The actual value at the time that you play will depend upon on the last time it was hit.