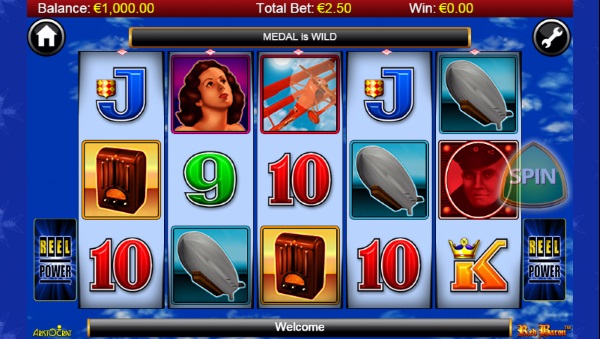 Play Red Baron for real with any of the following sites:

Red baron is based on the story of the legendary World War 1 pilot, Red Baron, who ruled the skies from his cockpit in a red biplane. The legendary figure has been a subject of many media such as cartoons and films, and is now a part of a this pokies game.

All the reel symbols are related to the World War theme such as dog fights, aeronautics, and other integral themes of the era when the Red Baron roamed the skies. The game icons include Zeppelins, wireless radios, Red Baron, planes, targets, and medals. Other icons include more traditional slot symbols which shine through with great sound effects and amazing animations. The graphics and animations are top-notch and lend an authentic feel to the game.

As this game has 243 paylines, you can potentially get very large payouts when playing it. There are different bonus rounds in this game. The iron cross icon activates an important bonus round here. This symbol gets converted into a wild when it appears on the third reel. This wild can replace any other symbol in the game to aid you in making winning combinations. On triggering this bonus, players are awarded with free rounds that come with an attached 8x multiplier.

The second bonus is triggered on landing with three or more of the target icons on the reels. A catch here is that the symbols should appear on the second, third, and fourth reels only so as to initiate the free spins. You can expect 15 free spins if this bonus is successfully triggered. During this round, you are tasked with predicting the number of target symbols likely to come up on the reels. If your guess and the number on the screen are same, you are awarded with multipliers on your winnings. This is a highly lucrative round, as the multiplier can potentially touch up to 140x.