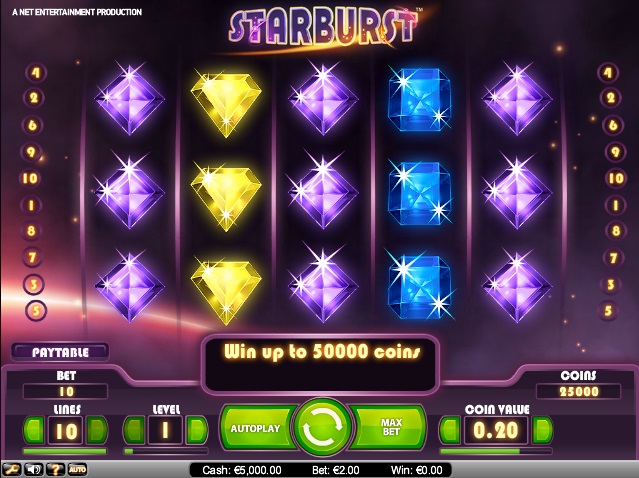 Play Starburst for real with any of the following sites:

With dazzling jewels and extremely vibrant colors of blue, purple, yellow, orange, and green you will find Starburst pokies game feature 5-reels with a total of 10-paylines that could reward you with an amazing 50,000 coins.

Along with the various jewel symbols that this game features, you’ll also encounter bar symbols and 7 symbols as you play, which happen to be the two highest-paying symbols.

There are plenty of features available on the Starburst, from a Win Both Ways feature to incredible Wilds, you can also play with autoplay feature, which allows you to sit back and watch the reels spin without having to click your mouse or press any buttons. You can even change various settings to control when you’d like the autoplay feature to stop.

Another feature that’s available on this game, is the Skill Stop feature. This feature allows you to manually stop the reels with a single click of your mouse. Although the outcome of the spin is still determined randomly, there are many players who feel that having the ability to stop the reels allows them to control which symbols land on the reels.