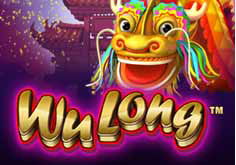 Play Wu Long for real with any of the following sites:

Wu Long is wonderful pokies game developed by Playtech which has beautiful dragons based on Ancient Chinese tradition. These dragons are said to bring good luck and great fortune to win.

Wu Long in Chinese means black dragon and you can see the dragon dance in Chinese New Year and other festivals. This pokies is 5 reels and 25 paylines where you will find a shadow of giant temple with colourful fireworks exploding in the background and lighting up the skies.

The five spinning reels of the game display three symbols each, with 25 paylines in total running across the screen in all directions. Your goal is to land winning combinations of symbols on activated paylines in order to trigger their corresponding cash prize. To activate the reels you need to select a bet. A bigger bet also means bigger potential rewards, and that may hit the jackpot.

The reel symbols of Wu Long follow a classic pattern that contains the Jack, Queen, King and Ace. These golden symbols, inspired by playing cards, are the most frequent in Wu Long. On the other hand, they have very low payouts.

The rest of the symbols contains a Paper Lantern, a set of Fireworks, Cymbals, Drums, two Chinese Women wielding folding fans and the majestic Entrance Gate to the temple. Although less common, these symbols bring about much more interesting rewards, so it might be a good idea to look out for them throughout your gaming session.

In Wu Long, the Dragon is a symbol of luck and prosperity. On the reels, it will bring you many Free Spins to give you an extra chance at winning big, at no cost.

All you need to do is land Dragon symbols anywhere on the reels. The Dragon is indeed a Scatter, which means that you do not have to worry about paylines when it comes to it.

Landing a single Dragon slowing increases the game Multiplier up to x6, two Dragons do the same with two Free Spins on top. From three Dragons, the Multiplier is automatically set on x6. You win four, eight and up to twelve Free Spins with three, four and five Dragons on the reels, respectively.