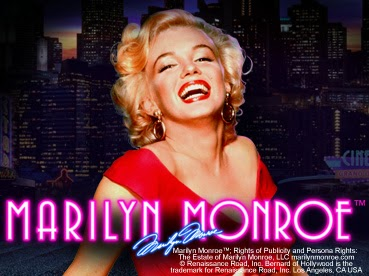 Play Marilyn Monroe for real with any of the following sites:

Marilyn Monroe is the famous and popular actress of the 50s and 60s and was married to fellow icons Arthur Miller and Joe DiMaggio before tragically ending her own life in 1962. This pokies game is themed on her with 5 reels and 20 paylines paying tribute to her.

The pokies machine is filled with some of the more popular and well-remembered images of the actress. The wild symbol will expand to fill in the whole reel, becoming an animated version of the most iconic picture of Marilyn Monroe where she’s laughing as her skirt is blown up by the subway vent beneath her. Almost every visual in the game is dedicated to Marilyn Monroe, with the standard symbols being the normal playing cards. There are other, higher paying symbols, including the Walk of Fame star, magazines that feature Monroe on the cover, a movie camera, and a few of her more iconic poses. Another Marilyn symbol serves as the wild symbol, with a neon Marilyn Monroe logo being the scatter.

The game comes packed with a scatter symbol, a wild symbol, a stacked wild, free spins, and even a backstage bonus. You can begin your play from just to 20p a spin and goes all the way to up to $1,000 a spin.

The wild symbol can also be a winning combination all on its own and if you line up two wild symbols then you receive a payout for that instead of the winning combination you got with the other symbol. This is only if the payout for two wilds is higher. If you would have won more money with three of the third symbol, then you get that payout instead. Basically, you receive the payout that is highest. It should also be noted that the wild bonus is also stackable.

If you manage to land three or more of the Marilyn Monroe logos then you unlock the bonus game called the Backstage Bonus. You’re taken to Marilyn’s dressing room and given 10 free spins and a 2x multiplier for your efforts.

The mirror features five pictures of Monroe and you have to pick two of them. When you pick a picture you are given free spins, multipliers, or both. They are added to your totals. If you play your cards right you can end up with 45 free spins and a 10x multiplier.

Also these free spins can be re-triggered by getting three or more scatters. Doing so grabs you 35 extra free spins that come with the same multiplier. You can end up with 35 more spins on a 10x multiplier which adds more to your wins.