Age of the Gods- King of Olympus

Home/Playtech/Age of the Gods- King of Olympus 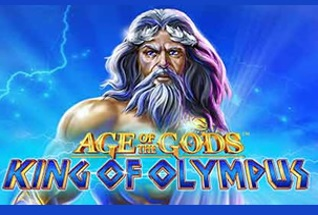 Play Age of the Gods- King of Olympus for real with any of the following sites:

You will find the symbols related to Ancient Greek like the clay vases, golden lyres and magnificent sailing vessels. The most beautiful icons of all depict a stunning eagle often used as a symbol for Zeus and the winged horse Pegasus, who served Zeus by delivering thunder and lightning from Olympus.

Age of Gods: King of Olympus gives range of wagering options available for punters to choose from, as such: 0.01 as minimum to $100.00 as maximum

There is a standard wild icon in the base game – as depicted by Zeus himself – which will substitute for all other icons to complete wins, except for one. That exempt symbol is the “Zeus” logo scatter icon which will award total bet multiplier prizes of 1x, 3x, 10x and 100x whenever two or more appear in any position on the reels.

If three or more scatter symbols appear during a single spin, you will get 10 free spins with a multiplier that starts at x2 and which will increase by 1 with every 2 free spins. On top of that, these free spins include an extra Zeus wild symbol that is locked to the middle position of the middle reel for the entirety of the bonus game.

As with every title in the Age of the Gods series, King of Olympus has a special bonus game that is awarded completely at random. This pick’em style feature gives punters the chance to win one of four progressive jackpots for some truly heavenly wins.