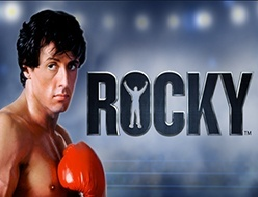 Play Rocky for real with any of the following sites:

Rocky is a pokies game from Playtech with 5 reels and 25 payline based on Boxing game as well as the boxer players. This pokies depicts Rocky Balboa from the 2006 American sports drama and film written, directed by, and starring Sylvester Stallone who reprises his role as the title character.

Rocky gets to climb into the reels with some of his biggest opponents in the shape of Apollo Creed, Ivan Drago and Clubber Lang, and the love of his life Adrian plays as big a role as ever in his determination to lift the big prizes.

In this pokies game you can enjoy round after round of 3, 4 and 5 symbol wins which include 300 for keeping Adrian safe, 500 for turning Clubber Lang into Blubber Lang, 800 for sending Ivan Drago back to Russia with a butt-kicking, and 1,000 for flooring Apollo Creed.

There’s also some smaller wins for lining-up 3, 4 or 5 of any of the American-flag stylized letters R.O.C.K.Y. However, should you manage to spell ROCKY across the reels you will win 5x your total-bet.

There is another way to win total-bet multipliers in the form of the Italian Stallion Scatter Symbols, and finding all 5 on the reels will trigger a win of 100x your total-bet, with smaller amounts winning smaller prizes. 3, 4 and 5 Italian Stallions will also respectively trigger 15, 20 and 25 free games in which you can enjoy all prizes being paid out at double the normal pay-table rate. Wild Rocky’s will also be added to the reels throughout the Free Games Bonus.

You can also enjoy Wilds in the main game with 5 Rocky Symbols lining-up to award the top prize of 10,000 coins. You’ll see white and red boxing gloves punching their way around the reels and, when they respectively and simultaneously land on reels 1 and 5, they will trigger the Knockout Bonus. You’ll then get to choose either Apollo Creed, Ivan Drago or Clubber Lang as Rocky’s next opponent. Once you’ve chosen, you can take your ringside seat and cheer on Rocky, with each round he wins awarding you a cash prize. However, if Rocky knocks out his opponent at any time you will win all 10 rounds.

It is your choice to try and double any prize you win on the turn-a-card gamble feature, or simply collect your prize and carry on fighting.