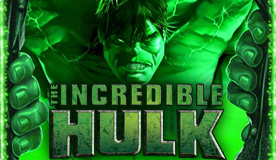 Play Incredible Hulk for real with any of the following sites:

Incredible Hulk is run over 5 reels and has a total of 50 paylines. It follows the story of Bruce Banner, a scientist who turns into the giant green Incredible Hulk, namely when he gets angry. With cartoony images this marvel themed pokies has four progressive jackpots.

There is a coin value range of $0.01 and $1 with a total of ten coins per line being permitted to be wagered. The high playing card icons, such as the 9, 10, Jack, Queen, King and Ace are present and there are also other top icons such as police cards, radioactive warnings, green potions, and of course, the big star of the pokies game, the Incredible Hulk, himself.

The Incredible Hulk  scatter icon is the title logo. The scatter icon will trigger 10 free spins, when three or more of the icons appear anywhere on the reels. It is fairly hard to acquire, but when it is acquired, players are assured of really big wins. There is also a 3x multiplier applied to the free spins bonus round.

The wild symbol will expand when it appears on certain reels and in specific places. Should the wild icon appear in the centre of the middle reels, or on 2, 3 and 4 at the same time, it becomes an expanding wild icon. Whilst it is expanded, the other reels (without expanding wilds on) will re-spin, offering the player huge prizes.

There is another bonus round, called the Smash Bonus round. The Smash Bonus symbol will trigger this round, and it appears on reels 1 and 5. In this bonus round, a player must use The Hulk to destroy three from a number of cars on the screen in order to win prizes. The Hulk must also crash a helicopter in order to win a multiplier to go alongside those prizes. There is also a randomly triggered rage feature, which will see Hulk destroy seven cards at once, paying some great wins.

As said there are four progressive jackpots in the network that can be triggered on any Marvel super-hero themed game by Playtech, at any time, and with any wager selected.

When this happens, you will be taken to a screen filled with 20 different squares. You will then be invited to uncover each square, which will reveal a symbol. There are four different symbols, each one standing for a different jackpot.

Once you match up three of these icons,  you will win the progressive jackpot that the icons represent.