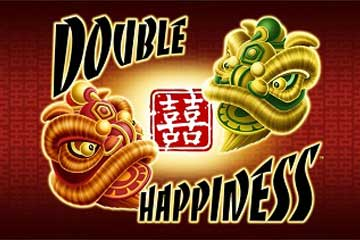 Play Double Happiness for real with any of the following sites:

Who doesn’t wish for happiness and that to if you are getting double the happiness? This Chinese-themed pokies aims to deliver just that Based on Chinese traditions and culture, it  takes you on an exotic tour of China and celebrates every time you hit a winning payline. The more you win, the more the happiness.

Symbols in the game include images that represent happiness – a happy Chinese child, a drum, crackers, Chinese lamps and cymbals. The game also has a wild symbol that improves your chances of winning by several times. Also, the scatter symbol in the game triggers the bonus rounds, which offer a chance to win more money in a single spin. Symbols in the game also include high card values A, K, Q, J, 10 and 9.

The roaming wilds and the scatter are the highlights of this pokies game. Double Happiness has the dragon as its wild symbol and also the highest paying symbol on the reels. Five dragons can multiply your wining amount by 2500 and can appear anywhere on the reels. The roaming wild feature shifts the position of the wild symbol at random between two spins. If the wild appears on the same spot in both the spins, any wins are then multiplied by 10.

The Double Happiness symbol (a Chinese symbol) is the scatter and triggers the double roaming wild feature. If the scatter symbol appears right beneath the roaming wild, a scatter prize is awarded to the player. The feature can be re-triggered and the player gets to play the awarded number of free games in one single spin. The wild can substitute any symbol in the game, except the scatter.

Double Happiness also has a gamble feature that allows you to wager your winnings for a chance to win more money. This allows the player to gamble the winnings to double or quadruple the amount. The player can gamble his or her winnings up to 5 times only.