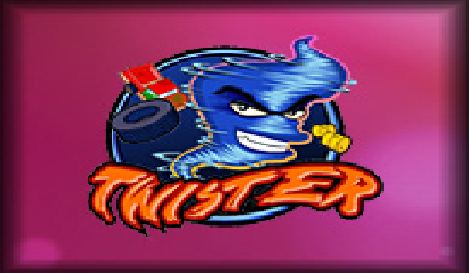 Play Twister for real with any of the following sites:

The symbols are Zeke, Buba, Kwik Mart, Suzanne, Trailer, Truck, Outhouse and the Laverne symbol.The Twister symbol is the Wild symbol, it stands in for every other symbol on the reels except the Scatter symbols. You will be awarded a set of payouts when at least two consective Wild symbol spin in, on any activated payline.

The Scatter symbols on the Twister pokie machine are the Twister symbols, you will be awarded a scatter payout when you spin in at least 2 of them, spin in three or more of them in view and the free spin bonus game is triggered.

The Twister pokie games free spins bonus round will trigger when three or more scatter symbols appear in view, and when they do 20 free spins are awarded, these play with a x2 multiplier. The free spins can be re-trigger by spinning in another set of the Television scatter symbols in a free spin.

When a base game spin has resulted in a winning combination being formed then you can double its value by taking part, and winning the gamble game. This is a guessing game, where you have to predict the colour of a playing card which is about to be revealed. You can gamble repeatedly until you have reached the maximum gamble win amount.