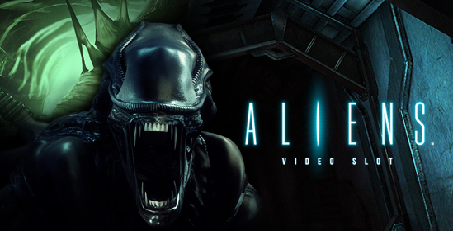 Play Aliens for real with any of the following sites:

How about meeting few Aliens at home? You can do so in 5-reel, 15-payline video pokies that features 3 rows, collectable multipliers, wilds, re-spins, with stunning 3D graphics.

This game is themed on the movie Alien that was released back in 1986. Amidst alien activity, players must shoot their way through extra-terrestrial attacks until they reach the Queen Hive.

The game play is a combination of real-time animation and traditional pokies setup. The game features a tense, dark, and brooding atmosphere that is certainly reminiscent of the Alien films. The music is also well-composed and perfectly matches the theme.

The symbols are a collection of Monsters and Alien Eggs, with the highest value as the full grown Monster and the lowest value the Unhatched Egg. The Weyland-Yutani Corporation Logo is the wild symbol.

Aliens  game consists of 3 levels. In Level 1 your goal is to ensure the Alien Activity Meter is filled with the highest multipliers in order to receive the level’s bonus, and this also sets you up for huge wins in Level 2. The second level is what is known as the Encounter level where you are guaranteed of a win from the very first spin you make. To successfully complete this level you must shoot all Aliens without running out of ammo. Successfully completing Level 2 will see you enter Level 3, known as The Hive. At this level you will be rewarded with 5 re-spins and destroying the Queen Hive with a single grenade will see that you get maximum credits.

Aliens is played with bet levels of 1 up to 10 and with a total of 15 bet lines. Aliens Slot can be played with 7 different coin values ranging from $ 0,01 to $ 1,00. The winning bet lines can be won by identical symbols on any bet line and also on adjacent reels from left to right.