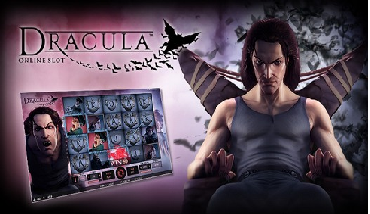 Play Dracula for real with any of the following sites:

Are you afraid of Dracula? Here it comes in a 40 line pokies game with a 4 by 5 reel layout that features free spins, a special bat feature and special stacked symbols. While playing this game you can win up to 80,000 credits.

Keep an eye on Dracula sitting next to the reels as at any time he can transform into bats. These bats then land on the reels and turn all symbols they land on into the same symbol including the wild logo.

Watch out for the stacked Dracula and Bride symbols which take up three symbol positions. Get a whole stack of both on the screen at the same time and you win 10 free games where the bat feature is triggered on every spin.

The minimum bet per spin is 20 cents with a maximum bet of $200. The maximum amount winnable is up to 400 times your stake. The wild symbol is clearly identifiable as the red ‘W’ symbol and can appear anywhere on reels two, three or four in during the main game. Wilds can substitute all symbols for the highest possible win on any bet line.

During the free games the two stacked symbols ,merge to form a special stacked wild that only appears on the middle reel. Get a whole stack in view and you win an extra 2 free spins.

The stacked wild symbol is the image of Dracula and the Lady embracing. This symbol can only appear during the free spins round and only in reel three. The stacked wild substitutes all other symbols for the highest possible win on any bet line and will activate an additional two free spins.

Other symbols are made up of Victorian era characters, from beggars to the aristocratic, and majestic bat protected shields displaying J, Q, K and A.

The Bat feature triggered at random, is the standout feature of Dracula. When the Bat feature is activated, you will find a flock of creepy black vampire bats. The bats fly in and land anywhere across the reels, with each cluster of bats transforming into the same symbol. The symbol the bats change into is determined at random, but carries the possibility of turning them all to wilds, making the Bat feature potentially highly lucrative.