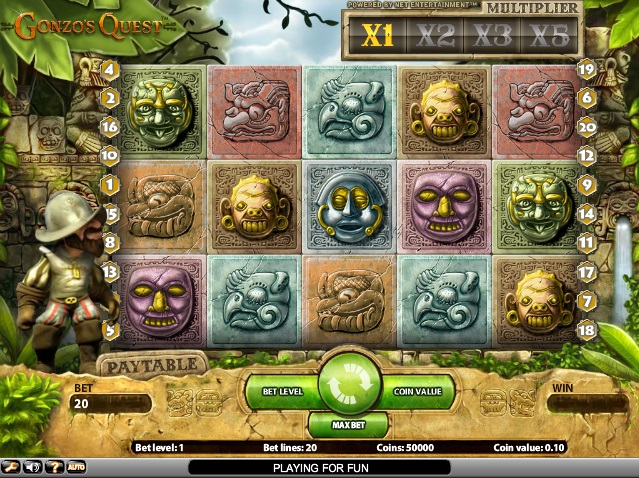 Play Gonzo’s Quest for real with any of the following sites:

Have you heard of Gonzo? He is one of the historical character Gonzalo Pizzaro-a real Spanish conquistador. In this pokies it features as a funny, 3-D animated version of the explorer setting off to find Eldorado, the fictional lost city of gold.

The screen art is beautifully rendered, with an Inca temple in the background, lots of greenery, and fountain of water pouring out of a stone carved face. The background noises make you feel like you’re really in a Central American jungle, and when the symbols fall, it sounds like real stones tumbling.

You will find an animated film introducing you to Gonzo’s story, where he jumps ship to go off in search of gold on his own. After the video, you’re launched directly into the 5-reel, 20-payline game, and Gonzo takes his place to the left of the screen, where he watches and waits to see how much gold you win for him.

All of the symbols feature a detailed, realistic Inca carving of an animal or human face on a square stone. Each is a different color: pale blue is the lowest value symbol, pink the next highest, tan, purple, gold, green and finally, a greyish-blue face with gold trim marks the highest-earning symbol.

The Wild symbol is a grey engraved stone with a gold question mark and circle around it, while the Free Fall symbol is a solid gold medallion with a face in the middle of it.

There is an Avalanche feature, which means that symbols fall into place on the reels individually, as if being dropped from above. When they hit a winning bet line, they explode in an entertaining, 3D Fashion, and more symbols fall to fill in the gaps as long as there are winning paylines on the reels. Each additional win is multiplied. Once they’ve been awarded, all the symbols fall away and are replaced with 15 new ones. Because the Avalanche feature somewhat extends the game play, you get more chances to win with every spin.