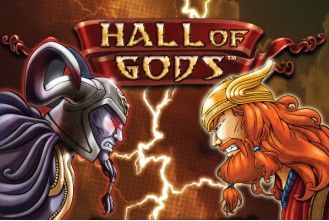 Play Hall Of Gods for real with any of the following sites:

Dream your journey on cruise to a world of Mythology in a Viking Ship. The Hall of Gods is such a 5 reel 20 payline pokies game featuring bonus game, Thor’s Hammer with lovely graphics providing the opportunity to win one of three impressive jackpots, and the Scatter and Wild symbols waiting to give you some additional chances to win big.

As the name implies, Hall of Gods is fully centered around Norse mythology. Suspenseful drumming music plays in the background, and builds with each spin of the reel, culminating in an exciting tune when you hit a winning line.

All symbols are intricately rendered and embellished with classic Norse artwork such as knots and scrolls. There are ten different designs of symbols that appear on the reels: five high-value symbols and five lower-value ones. The higher-value ones naturally feature the gods themselves, with lovely redheaded Idun ranking lowest. Next up in value is Loki, then Freya, then Thor, and finally, the white-bearded mighty Odin. Lower-value symbols start out with an open wooden chest holding apples, an axe, a necklace draped upon a stone, and Thor’s hammer. An ornate silver and gold ring carries the highest value of the five smaller symbols.

The ominous Serpent Wild symbol substitutes for all symbols except the Scatter and Bonus. As a neat visual feature, when it falls on a winning bet line over reels 2, 3 or 4, it expands over three columns to show the full beast rising out of the water and screeching. The Scatter symbol depicts two black ravens sitting on a grave, set against a full moon. You can use this symbol to activate Free Spins. Just land three or more Scatters anywhere on the reels in the main game and anything you win in this mode will be tripled. Three Scatter symbols equals 10 Free Spins, four Scatters will give you 15 Free Spins, and five Scatters results in generous 20 Free Spins.