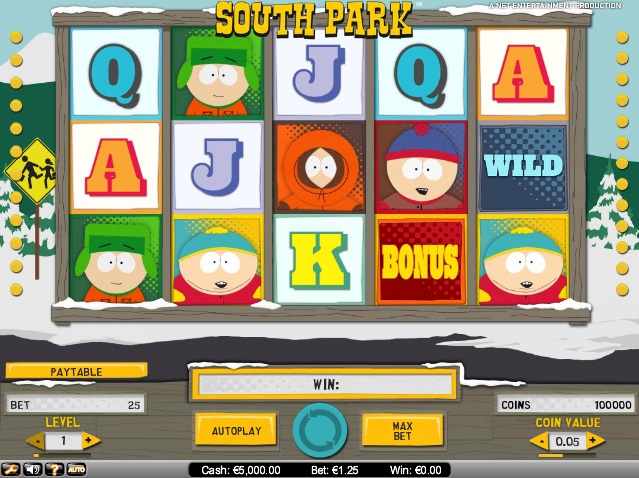 Play South Park for real with any of the following sites:

South Park is a 5-reel, 25-payline pokies game based on the South Park US TV show that has run for more than 15 years and features brutal satire, offensive and often insightful humor, as well as badly drawn characters . The game features wilds, free spins, bonus games, sticky wilds, and 3 mini features.

This pokies game gives you an opportunity to win up to 1,250,000 coins. With  wide range of bonuses, talking symbols, animated missions, and a load of fun.

You can see Cartman wield a fire extinguisher at some hippies and help Kenny dodge stricken airplanes in order to bag multipliers. Win prizes in the Hopscotch game by kicking Kyle’s baby brother Ike. Collect an array of sticky wilds and free spins by puking on Stan’s girlfriend Wendy.

Thus this game is full of special features that keep on appearing randomly on the screen. An example of such a feature is the Cartman Mini feature that features Cartman in beefcake mode. The feature is a 3×3 block of wild symbols that lead to multiple payline combinations and larger wins. The feature only shows up on the second, third, and fourth reels.

Another special feature is the Mr Hankey Mini feature where Mr Hanky can appear anywhere on the reels and the symbol keeps on splattering from symbol to symbol. On the next spin, the symbols are transformed into wilds. Another special feature is the Terrance and Philip Mini feature where the foul-mouthed duo randomly pop out of the reels and come with 3 wild symbols that you can use to substitute any other symbols on the reels, except the bonus symbol.