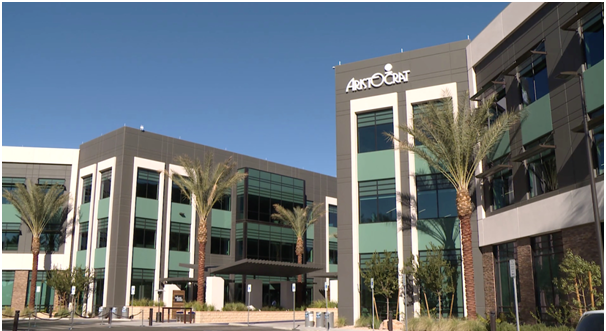 Popular Australian slots manufacturer Aristocrat Technologies lately unveiled its new $45 million headquarters in Summerlin, Las Vegas.  According to news report Aristocrat was a minor player in the North American casino industry, but over the past decade the company had significant market share from homegrown giants like Scientific Games and IGT and, in doing so, has transformed the casino floors of America. Aristocrat slot machines are now using best of latest technology and are replaced by Aristocrat’s hulking, futuristic Helix cabinet,  ergonomically designed terminals with high-resolution screens and quad sound systems.

The ceremony was attended by hundreds of Aristocrat employees, who hosted a warm clothing drive benefitting the Las Vegas Rescue Mission as part of the celebration. Additionally, Croker dedicated the campus’ outdoor park to Dr. Blackburne, who will soon be retiring from the Aristocrat Board, naming it Blackburne Park.

As the company’s relationship with Las Vegas has been mutually transformational, for 60 years a domestic manufacturer of “pokies,” as they are known colloquially in Australia, Aristocrat is now one of the global market leaders in casino technology, and its new campus reflects its status as a major player and employer in Las Vegas.

It’s so much part of the Vegas establishment these days, in fact, that one of executives is married the governor of Nevada  which is about as “aristocratic” as you can get in a republic.

Aristocrat presently is licensed in 240 jurisdictions in 90 countries and has a total global employee base of 3,000, but the US and Las Vegas, especially  has become the beating heart of its business.

CEO Trevor Croker took over the reins of the company in 2017 and quickly made the decision to move it from its traditional Sydney base. Australia now accounts for just 20 percent of Aristocrat’s business, while 65 percent is conducted in the US.

The Las Vegas Review-Journal reported that as the chairman Ian Blackburne cut the blue ribbon outside the new headquarters he said he had only one material presence in one part of one segment of this business a decade ago.

Ten years ago, at the onset of the financial crisis, Aristocrat was struggling and was forced to initiate an efficiency drive that involved widespread job cuts. This was despite the fact that many of its competitors were experiencing record growth at the same time. The following year, Aristocrat reported a net loss of $157.8 million.

Its recovery and subsequent explosive growth have been aided by some shrewd acquisitions, most significantly its 2014 purchase of Video Gaming Technologies (VGT) for $1.3 billion. According to analyst Eilers & Krejcik Gaming, amid declining financial results in Australia, the deal tripled its exposure to the US market, where it has been the “primary market-share gainer” ever since

Last year, it entered the mobile games market through its purchase of Plarium for $500 million and Big Fish Fames for $990 million.

The new campus, located at 10200 Aristocrat Way, consists of two three-story, tilt-up concrete structures of approximately 90,000 square feet each, delivering total floor space of approximately 180,000 square feet. The size of the campus allows the company to bring most of its 1,100 Las Vegas-based employees together at one site, while also allowing space for additional hiring.

The building shell and interiors use environmentally friendly materials. An open floor plan allows for enhanced collaboration, and a state-of-the-art showroom features more than 100 of the company’s newest slot games.

Note that other brand slot gaming developers too have their presence in Las Vegas.

For further information, visit the company’s website at www.aristocrat-us.com.