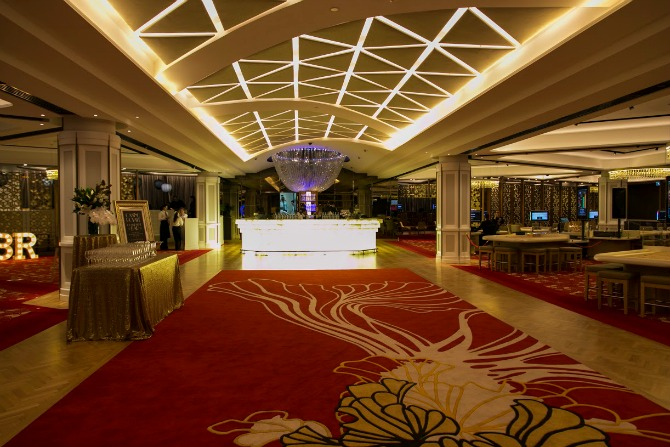 After months of renovations, Casino Canberra has finally re-opened to the public. The casino’s $14 million re-launch was attended by over 600 guests. With a glittering chandelier bar, VIP lounges and a restaurant headed by a team of award-winning chefs, the casino is now holding its own amongst the ranks of Sydney and Melbourne.

A posh and luxurious party was held  with red and gold carpets, sweeping ceilings with intricate detailing and twinkling grand chandeliers instantly brought a sense of old-school grandeur and atmosphere. According to news sources across the floor, guests mingled between sophisticated gold and white panels and grand columns, while more secluded seating lounges oozed luxe charm. The tired old carpets, John Howard statue and dated bar were already long forgotten.

The general consensus among guests was that it was a place you’d want to spend the evening in, rather than the casino of old, where visiting was more of an afterthought.

The casino’s new signature restaurant, Natural 9, is also set to be an exciting new player in Canberra’s dining scene. Led by Director of Food and Beverage Chad Ogden and highly regarded Chef de Cuisine David Black, the restaurant will serve modern Australian cuisine with French, American and Asian influences throughout the menu while ‘The Kitchen’ will offer a traditional Asian menu.  At the impressive Chandelier Bar, the casino’s skilled mixologists will serve up delectable versions of all the classics as well as tantalising top shelf offerings, while The Onyx Lounge offers a relaxed setting to catch up with friends or kick back after a long day.

A new gaming floor and VIP gaming salon are also included in the new offerings, with all new state of the art gaming equipment, including 50 gaming terminals in the first ever live stadium gaming experience in the ACT. A sports bar and The Lotus Room, a new poker lounge, will open upstairs later this month, while the rest is open to the public from today.

The casino will also offer players 200 poker machines. This is the first time that pokies have been made available in any venue outside of a club in Canberra. It is a ground-breaking move that has angered the clubs industry but it will certainly help to draw in more tourists and boost the local economy.

And, this is just the beginning – Aquis Entertainment has proposed the construction of a $330 million casino resort. It will feature two hotels, several restaurants and resort-style entertainment. The new property aims to capitalise on the addition of new international flights to the ACT.

The newly renovated Casino Canberra will transform the gambling market in the ACT. Individuals who visit the casino will be able to do more than just play pokies and table games; they will have a full entertainment experience in a high-class venue.

Speaking at the event, Aquis Entertainment Executive Director Jessica Mellor said she was proud to be able to deliver on the first part of the company’s vision for a revitalised entertainment offering in the CBD.  Aquis Entertainment is confident that it will bring in hundreds of thousands more visitors to the capital.