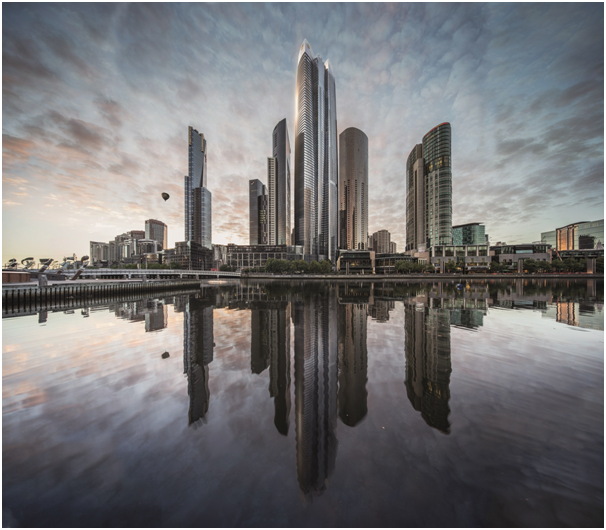 Crown Resorts will build Australia’s tallest skyscraper – a massive 90-storey hotel and apartment tower – on Melbourne’s Southbank next to its existing hotel and casino complex after the Victorian government signed off on the project today.

Crown’s One Queensbridge hotel will rise a staggering 323m over the city, piping the nearby Eureka Tower by around 26 metres and the planned Australia 108 in the city by 3 metres. It will feature 388 hotel rooms and 708 residential apartments and provide $2.1 billion in economic benefit, the company says. The hotel has been designed by London architecture firm Wilkinson Eyre.

It will also feature a rooftop bar, restaurants, retail and office space, along with a new, 24-hour pedestrian laneway connecting through to Freshwater Place.

When completed, One Queensbridge’s six-star hotel will give Crown more than 2000 rooms across its hotel and casino complex, which the company says is currently running at 90% capacity.

Premier Daniel Andrews called it “a bold transformation of Melbourne’s skyline” that will create up to 4000 jobs – 3000 during construction, then another 1000 jobs once the tower is open.

Although it will offer no gaming, it will be connected to the existing Crown Casino via a footbridge. Crown has said construction could begin as early as next year, with completion expected by the end of 2023. The project will proceed despite planning restrictions established by the Victorian government in 2015, which state that a building may not exceed a height that is 24 times the size of the plot it is built on.

An exception may be made, however, if the building is deemed to be of “state significance,” which is why planning minister Richard Wynne was eager to highlight the economic benefits of the development, which will be 56 times the height of its floor space.

As part of the negotiations between Crown Resorts and developer Schiavello Group, the companies will spend $100 million to upgrade Queensbridge Square and the disused Sandridge rail bridge. The deal includes landscaping and two new cafes in the square, while $15 million spent on the old rail bridge in a plan premier Andrews says will turn it into an area like Manhattan’s High Line park in New York.

Southbank Boulevard will also be improved, including a new bike strip. Schiavello Group hopes to get construction on the 5000 square metre site under way next year, with a construction time frame of five to six years.