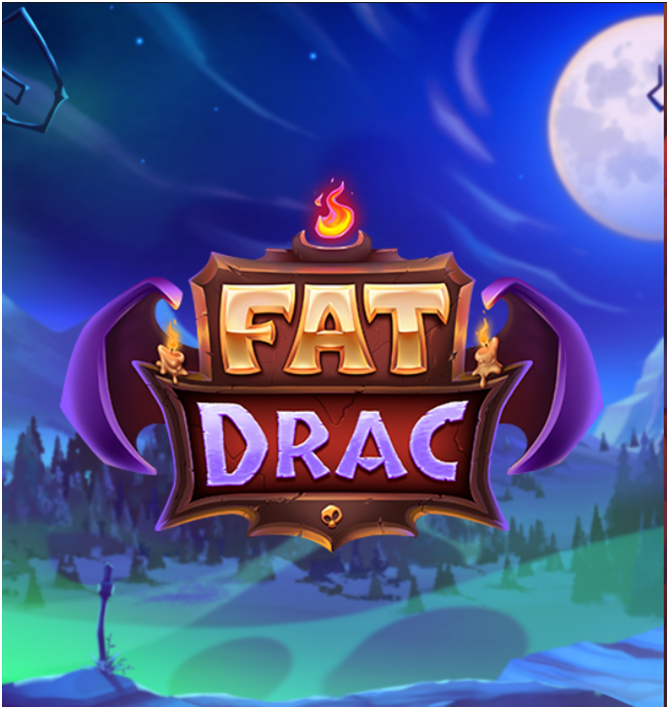 Fat Drac Slot Game is a new slot game with 5×5 reel set with 40 win lines. This is the third slot in Fat series by Push Gaming. The first was the classic Fat Rabbit, which is a cute game that captured all sorts of hearts. Then launched was Fat Santa slot, and now is the ‘Fat’ slot, Fat Drac. In this one, nosferatu chases goblets of blood around the screen triggering free spins where he increases in size.

Drac is joined by instant bubble rewards, pick ‘n clicks, and a fat bat feature, yet one significant change might upset the broth for certain fans. In time for Halloween, but relevant any time of year, Fat Drac is full of random rumbles and mischievous bats which add a real depth to the theme and overall gameplay

Fat Drac slot has a top prize of 50,000x. Features include instant win prize bubbles, a pick-a-prize round and a free spins bonus with walking, expanding wilds. The RTP of this highly volatile slot is variable, ranging from 90.49% to 96.57%.

Fat Drac caters to those who appreciate gameplay that has both classic and original elements to it. If no bonus gets activated, the base mode is still interesting but once wilds, scatters or other special symbols or features show up on the screen, it gets to the whole new level.

Play in the base game sees players searching for the Fat Drac symbol, which acts as both a Reveal and a Scatter symbol. When it lands, it can reveal a paying or a bat symbol, with the latter seeing the bat fly to an instant prize bubble, awarding players with the value attached. If the Fat Drac symbol lands with one or more goblets also present on the reels, the free games round is triggered.

When you land a coffin symbol during the base game of Fat Drac slots, you’ll trigger a pick-a-prize bonus. The coffin you select will reveal a number of bats (up to five can be chosen in this round).

The bats will then head over the Instant Win bubbles and award you with multiple prizes.

The Fat Drac free spins round is triggered when you land 1 or more goblet symbol at the same time as Fat Drac himself. You get five free spins.

In Push Gaming’s Fat Drac online slot bonus, you’ll find the the walking, colossal wild feature. The goblet symbols are what Fat Drac is after, and he’ll make his way around the reels to gobble them up. As he does, he’ll grow bigger and help you land wins much more easily.

When you land a coffin symbol in the free spins round, you’ll trigger a pick-a-prize bonus. Here, you’ll be able to receive more free spins, more goblets or more bats.

Instant prize bubbles are found in both the base game and free games round and offer multipliers that can reach all the way up to 50,000. A total of seven prize bubbles are shown and nudge by one position with every spin. A Fat Bat symbol can also land at any time, allowing a collection of all prize bubbles displayed.

Players must also keep an eye on a meter that follows Drac’s progress as he consumes more goblets with every corresponding symbol. Each time a level increases, free spins are awarded.

How to play the Fat Drac Slot game?

As before, the game is played on a 5-reel, 5-row game grid, this time providing 40 fixed ways to hit winning combinations on. Regular paying symbols start with the four card suits – spades, diamonds, hearts, and clubs, while premiums consist of false teeth, parchment, skeletons, and an Elizabethan era looking guy.

Land a combination of five premiums, and the payout is worth 5 to 25 times your stake. Interestingly, the Fat Drac symbol is not wild, but there is a golden wild symbol, landing anywhere to substitute regular pay symbols. The wild also pays out in combinations of itself, up to 250x the bet for five on a payline.

The Fat Drac is a revealing symbol, landing anywhere on the board. When a Fat Drac hits, he transforms to reveal any paying symbol or a Bat symbol.

The Fat Bat feature triggers at random on any base game spin. When activated, a Fat Bat hits the reels and collects all of the bubble prizes, awarding them to the player.

When a coffin symbol lands anywhere on the reels, the Pick feature is triggered – 4 tiles appear on screen for the player to choose one of. In the base game, tiles may reveal 1-5 bats or a goblet symbol – only if a Fat Drac symbol is present on reel 1.

When at least 1 Goblet symbol lands at the same time as a Fat Drac symbol, then 5 free spins are awarded. The Fat Drac symbol remains on the reels for the full duration of free spins, and whenever a new Goblet Symbol lands, the Drac moves to collect it. Also, during the feature, tiles may reveal 1-5 additional free spins, Goblet symbols, or up to 5 bats. Starting as a 1×1 symbol, as the Drac Symbol collects Goblets, it increases in size at set intervals, like so:

There are 40 lines in Push Gaming’s Fat Drac slot. So, it strays a little from the original two games, which had 50 lines. There is a much larger top prize available than Fat Rabbit’s 10,000x. If you’re lucky, you could score a whopping 50,000x max win.

Yes, at friendly online casinos you can  try Fat Drac with no registration required. Any casino site partnering with Push Gaming would also give free access to the demo mode.

Q3. Can I win real money on Fat Drac slot?

Yes, registered account with a gambling site would be the only option to enjoy real money Fat Drac and land real winnings.

Q4. Can I play Fat Drac slot on mobile phone?

Yes, this slot machine is mobile optimized and can be loaded on any device.

Q5. What is free spins bonus in this slot?

Landing Fat Drac and the chalice at the same time will trigger the free spins round. During this bonus, the same walking wild feature from Fat Rabbit is active, where Fat Drac travels around the screen to gobble up chalices of blood and growing bigger for greater winning potential.