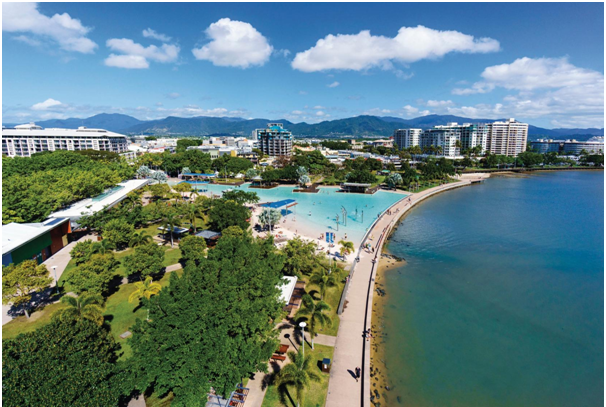 Recently the government of Queensland has announced plans for the development of a Global Tourism Hub on the waterfront of the city of Cairns as the state treasurer Curtis Pitt visited the city to make the important announcement. According to Mr. Pitt the idea for the project emerged after multiple international developers had shown interest in investing in the area. The government will give developers the opportunity to register interest in the project and expect the construction of six-star hotels, a casino, apartment towers, and luxury retail options, among other facilities. A formal expression of interest process will be launched after the six-week period during which interest registrations will be received. The EOI process will see further details released about the Global Tourism Hub concept. The government expects that plans for developments worth hundreds of millions and even billions of dollars will be submitted.

A slice of the Cairns City centre has been for earmarked for an integrated casino and tourism development to rival Brisbane’s $3 billion Queen’s Wharf project. The State Government called for expressions of interest to build a “global tourism hub” encompassing 3.32ha of waterfront land behind the Cairns Cruise Terminal and the 1.1ha site of the current Ports North office.- Photo source Cairns post

The casino at the Global Tourism Hub

The complex will be located on approximately four hectares of state-owned land on the Cairns waterfront. It is important to note that the portion of land where the Global Tourism Hub is proposed to be located is not far from the city’s existing casino – Reef Hotel Casino.
The government plans to issue a casino license as part of the whole scheme and welcome different proposals for the casino part of the whole project – from an expansion of the existing nearby casino to the addition of a new gambling venue as part of the whole development.
The Global Tourism Hub will be similar to the previously approved Queen’s Wharf development scheme in Brisbane. While the latter development will be much larger in scale, which is set to 12 hectares of land on the Brisbane waterfront and more than 15 hectares of the Brisbane River, it will also include a casino, hotels, apartment towers, high-end retail options, and many more.
The casino will be an important part of the whole development with separate gaming portion for players to enjoy.

The government believes that the fact the portion of land offered for development is actually owned by the state is a key element for the future success of the scheme. The Queen’s Wharf project, which is lauded as great success and its realization is highly anticipated, is also developed on state-owned land.
The Global Tourism Hub is expected to boost visits to the region and to generate multiple new jobs. According to Queensland Tourism Minister Kate Jones selecting Cairns for the massive project is a mark of trust in its capabilities to help the state boost its tourism. Ms. Jones pointed out that Queensland’s tourism industry is already worth A$25 billion and employs more than 200,000 people.