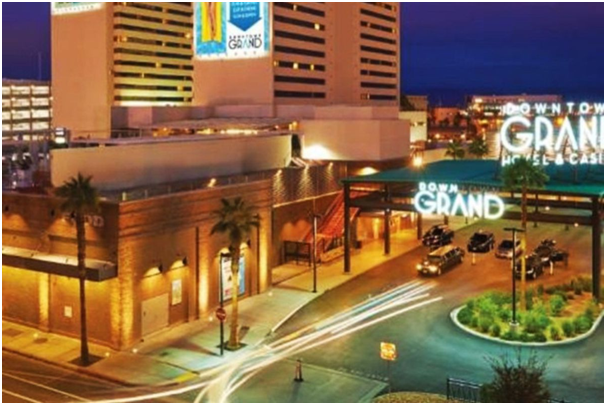 The Las Vegas Sun has recently leaked news about the new casino complex with a 459-foot-tall hotel tower which is set to replace the former Las Vegas Club in downtown Las Vegas. The Las Vegas Sun has reported citing documents submitted with city officials. The new property will feature a 117,740-square-foot casino, the above-mentioned hotel tower with 777 rooms for guests, a parking garage with 1,526 spaces, a sports book, food and beverage facilities, a rooftop lounge, a pool, a spa, and a number of other facilities. The garage and the main casino will be connected via a sky bridge.

The property will be located at the site of the former Las Vegas Club, Mermaids Casino, and the Girls of Glitter Gulch Topless Club. The three venues were located on Fremont Street right at the corner of Main Street, but were demolished to create room for the new development.

Developer Derek Stevens, who is also the owner of downtown The D Las Vegas hotel and casino, is behind the Fremont resort project. The development plan has been submitted with the Las Vegas Planning Commission. Commissioners are set to review it and decide whether they would grant five special-use permits to the developer. The scheme will next be referred to the Las Vegas City Council where it will be reviewed in June next month. Due to the planned height of the hotel tower, the project also needs to be given the green light from the Federal Aviation Administration.

While most of the major casino resorts are concentrated on the Las Vegas Strip, Mr. Stevens has been among the developers to have been looking to revitalize the city’s downtown. In an interview from earlier this year, the businessman said that with 20 million people annually visiting that part of Las Vegas, its significance “is hard to overstate”. He went on to say that he considered it their responsibility to do something special in downtown Las Vegas.

He called the block where his new property will be located the most important one in the history of Las Vegas, as the corner of Fremont and Main Streets is not far from where the popular casino hub was born.

An official name for the new resort is yet to be announced, but Mr. Stevens has told local media that they want something unique to Las Vegas, a throwback reference. The property will certainly not be named Las Vegas Club, as the developer had not bought the name along with the site it had occupied.

It is interesting to note that Mr. Stevens actually owns Grandissimo, the name of the unrealized Strip megaresort pitched by Jay Sarno. The late businessman was the person behind flagship properties like Caesars Palace and Circus Circus. In his interview from earlier this year, Mr. Stevens said that they were not ruling out the option to name his new property Grandissimo, but a final choice on that was yet to be made.

The recent casino projects in downtown Las Vegas have largely been remodels and refurbishments, not new construction. The California Hotel opened in 1975, the Plaza in 1971 and the Four Queens in 1966. The off-Strip Lucky Dragon, the first resort built from the ground up since the recession, is inside Las Vegas city limits. The Lucky Dragon opened its doors on West Sahara Avenue in late 2016 but is now in bankruptcy.