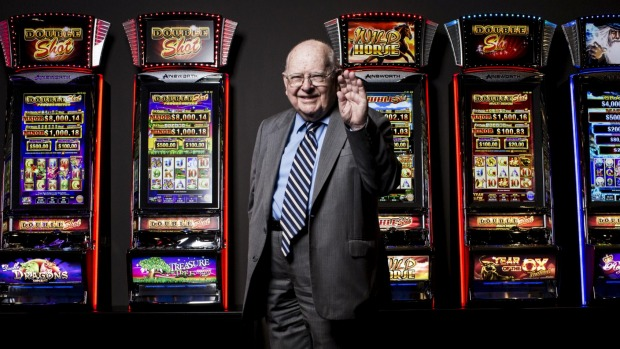 Pokies giant billionaire Len Ainsworth is now 92 and is seeking an exit from the pokies empire he founded two decades ago. His company Ainsworth Game Technology was putting off potential bidders for years is now in hands of Novomatic an Austrian Gaming giant who has lobbed a $2.75-a-share offer to buy Mr Ainsworth’s 53 per cent stake in the company in a transaction that could hand the Len Ainsworth proceeds of $473 million.

Remember Ainsworth gifted a large stake in Aristocrat Leisure to his 7 sons and wife 20 years ago; entitled to some proceeds if they sell but not to shares themselves. Founded Aristocrat in 1953 but stepped aside in 1994 after cancer scare; it’s now world’s second-biggest gaming machine company. He founded a similar company, Ainsworth Game Technology, the following year, at age 72.

Ainsworth now faces a fight to cash in a $500 million windfall after the Australian Securities and Investments Commission (ASIC) lodged a rare application with the Takeovers Panel, arguing his wife, Gretel, should be barred from voting as a minority shareholder on the deal.

The offer will be decided at an extraordinary general meeting on June 3, 2016. But some investors are worried that Mrs Ainsworth will be allowed to vote as a minority and use her 8.9 per cent shareholding in AGT to help push the deal through.

While the board has recommended the transaction, it will proceed only if more than 50 per cent of Ainsworth’s minority shareholders vote in favour at the EGM. AGT has received its own legal advice the Ainsworth family should be treated as minorities.

ASIC is seeking final orders that require Mrs Ainsworth not vote in favour of the share sale transaction, not dispose her shares prior to the meeting and that AGT issue a supplementary notice of meeting disclosing the association of Mr and Mrs Ainsworth.

It is understood Mr Ainsworth and his wife are travelling in Europe and neither is expected to attend the company’s EGM on June 3. this year. Mrs Ainsworth has engaged her own legal counsel who are thought to have already spoken with ASIC on the minority voting issue.

Some minority investors have also been agitating for a full takeover of Ainsworth, questioning why the pokie maker had not demanded the same $2.75-a-share price for the rest of the company’s register.

Novomatic have pointed to the likely slow down for the deal to be completed, with executives from the Austrian company requiring probity clearances from regulators in Australia and the US, and this is likely to take more than a year.

The Vienna-based company says it is confident the deal will be approved by investors and has cited demands made by Mr Ainsworth that the company remain Australian listed and at least partly in public hands.

Novomatic gave a sense of its scale after committing to buy 2000 poker machines from Ainsworth in the next two years for use in its own European casinos and clubs.