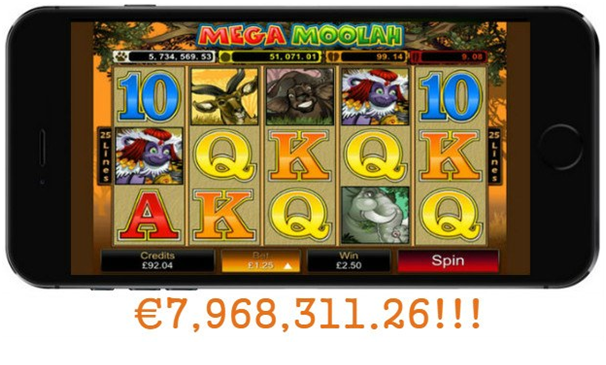 Playing pokies with mobile really pays BIG. Recently on August 28th 2016 a player known as D P (as name is kept anonymous) a Zodiac Casino player won the Mega Moolah Jackpot playing on mobile. The pay-out of €7,968,311.26 is the largest mobile jackpot win in history, and as per all wins on Microgaming’s progressive jackpot network, the near €8 million will be given to the player in a lump sum.

The hugely popular 5-reel online pokie machine has been hit for a progressive payout of AUD11,825,439 making Microgaming have Guinness on the phone again as the prize won is the biggest ever bagged on a mobile phone.

Usually, Mega Moolah’s progressive jackpot can only be won when playing at the top stakes. However, a special €1 offer on the site allowed 80 players to take a shot at the big one on the cheap.

Microgaming’s popular pokie machine had already won players over AUD800 million since it was released. In April, a lucky Spin Palace customer celebrated an online win of  €6.9 million (AUD10 million). British player Jon Heywood took down the game’s biggest-ever payout of £13.2 million in 2015 (AUD27.5 million). Amazingly, the win was achieved when betting at just 50c per spin. The Brit splashed out on a Bentley Continental GT with his cash, as well as famously paying for his father’s life-saving medical bills.

The best news for everyone else out there is that the mega jackpot is already back up above 5 million and could be won at any moment by a ZodiacCasino.com player. The record-holding pokies actually averages a progressive jackpot win every 12 weeks or so, with the average win total topping €5 million.

So, on average, a random player takes home around €5 million every 12 weeks playing Mega Moolah with the chance at way more.

Most mobile punters outside Australia can take a shot at the Mega Moolah jackpots. Mobile and online casinos offering the game are linked, which leads to some ‘mega’ prizes throughout the year.

The 5-reel video pokie game features four separate jackpots: the small Mini (seeded at $10), the Minor, Major and Mega. As you know, the bigger the jackpot, larger the minimum payout. The biggest Mega, jackpot seeds at $1 million after it has been triggered at casinos.

Whenever a big payout is made, players tend to rush to online casinos to start building the big jackpots up again.

If you’re interested in becoming one of these lucky winners taking home a life-changing amount of money from a single spin then you need to start playing at one of the top Microgaming Casinos offering these topnotch progressive pokies and also avail generous welcome bonus.