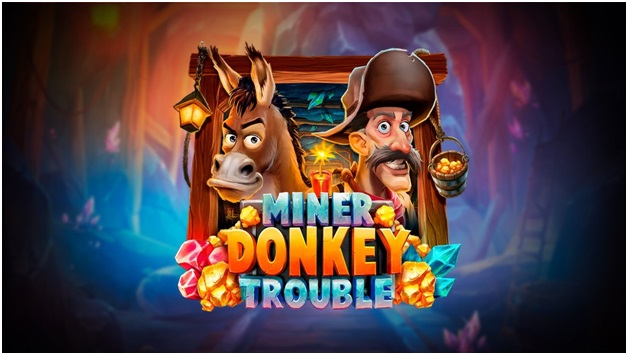 Miner Donkey Trouble is a cascading grid slot in a 5×7 format with cluster pays. Wins are awarded for clusters of five or more matching symbols landing horizontally and/or vertically connected. Bets start from 0.10 to 100 credits per spin. The game has high volatility with an RTP of 96.27%.

In the game you will see you descending into the mine together with the two comical characters who will stand on either side of the grid throughout the gameplay to cheer you on in your prospecting endeavors. Candles and oil lamps are illuminating the mine and the grid with the latter populated by gems and golden nuggets. Various displays on both sides will assist in keeping track of the gameplay and payouts.

The pay symbol set is divided into two groups of rocks and gems. At the low end are four small rocks in pale colours –  brown, blue, jade green, yellow – awarding between 5x and 10x your bet for clusters of 18 or more symbols. They are followed by four elaborate gem formations in purple, turquoise, green and red colours. Hit clusters for 18+ symbols to win 20x to 250x your stake. Plus, there are four special symbols – diamond wild, pickaxe, golden nugget and diamond scatter.

Just like most grid slots, at the core of the gameplay cascading symbols mechanic with cluster pays. At the start of a spin sequence, 35 symbols cascade from the top onto the 5×7 game grid. To hit a win, you will need to hit clusters of five or more matching symbols landing horizontally and/or vertically connected. All symbols in the combo will explode and new symbols will drop into place. This continues as long as new winning clusters hit after a fresh cascade. A display on the left of the grid will help you keep track of the payouts from the current round.

One of three modifier features is awarded and queued once the respective threshold of accumulated symbols is reached within the same spin sequence. The queued modifiers are triggered consecutively when no new wins occur after a cascade. Each will be awarded only once per game round.

So in the base game alone, there are multiple features, including the Donkey Destruction feature, which has three variations, and an extra spins feature that really ramps up gameplay.

Those together with the Golden Nuggets which alone have no value but when they appear on or reach the grid’s bottom row, they are removed, increasing the win multiplier by +1, which applies to any additional winning clusters. Other special elements include the Pickaxe Wild, Diamond Wilds, Dynamite Scatter, and Random Mega Symbol feature.

Now play this slot game at any Play N Go powered online casino and have fun.