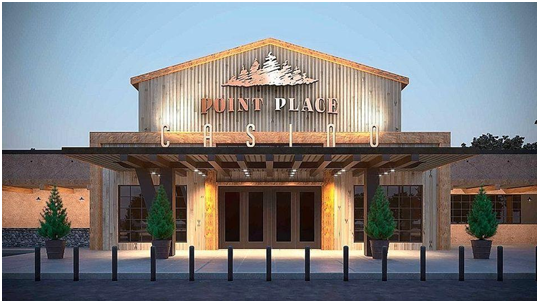 According to latest casino updates Oneida Nation announces that a new casino in Central New York is scheduled to open in spring 2018. The Oneida Nation plans to begin construction this month on a facility that will cost between $40 million and $50 million. It will be situated in Bridgeport, along the Onondaga County-Madison County border, about 20 minutes from Syracuse.

The new 24-hour-a-day facility – called Point Place Casino – will be 65,000 square feet and will employ about 200 people according to officials and there will be parking for about 800 vehicles too.  The casino will have nearly 500 slot machines and 20 table games and will have two places to eat, a bakery and two lounges. It will be slightly smaller than the 67,000-square-foot Yellow Brick Road Casino in Chittenango which the Oneida Nation opened in June 2015. Yellow Brick Road has 431 slot machines and 14 table games. The new casino will be smoke free and alcohol will be served.

This will be the closest casino to Onondaga County. Yellow Brick Road is a mile from the Onondaga County line. Under agreements with the state, the Oneidas can open casinos in Madison or Oneida counties on nation-owned land.

Because the facility will be situated on Oneida Nation land, no permission or license is required from federal, state or local governments to open the casino. The Oneida Nation also operates Turning Stone Resort and Casino in Verona, which is 30 minutes from Bridgeport.

The latest project adds to the burgeoning casino market in upstate New York and potentially adds to concerns about market saturation. Legislation passed in 2013 allowed for four new commercial casinos to be built across upstate, with winning bids awarded a year later to Schenectady, Tyre, Nichols and the Catskills.

Rivers Casino & Resort opened Feb. 8 in Schenectady. Though the results have yet to bear out, there has been plenty of discussion over how Rivers will affect, or be affected by, the racino in Saratoga. Some have suggested the Capital Region gambling market has become too saturated, though Rivers’ developers have said that’s not an issue.

The new casino is unlikely to draw many visitors who frequent Rivers Casino, but instead will directly compete with the del Lago Resort and Casino, which opened in February and is less than an hour away.