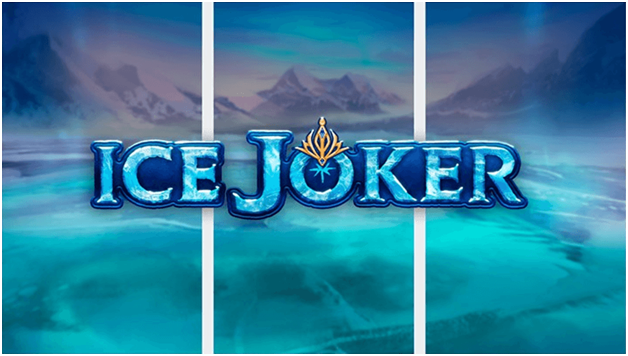 Play n Go the popular online casino gaming provider has recently launched a very exciting new slot game called Ice Joker. This slot game is a twist on a classic Vegas-style fruit slot. The setting for the 5-reel, 3-row video slot with 20 fixed paylines is a frozen lake in the middle of a snow-covered mountain range where a brand new Joker character, Iceilia, rules the reels.

Symbols in the medium volatility game include frost-covered cherries, lemons, grapes and plums, which comprise the low-pays, along with bars, stars, and lucky sevens for the premiums. Appearing on reels 1, 3, or 5, the snowflake serves as the game’s scatter and when three are in view, the Winters Wheel is unlocked, awarding 2 to 7 Ice Jokers.

Winning combinations in this slot, which play left to right, are formed by landing at least three like symbols, whereas five of a kind from the highs is worth 5 to 50 times the stake. The giggling Ice Joker is the Special Wild in the new release and it is sticky and with each respin, expands. Landing Iceilia activates Frozen Extra Spins, and a grid full of lucky 7s awards 1000xs the bet. The game RTP is 96.23%

The Joker series of games is one of many games ‘families’ that Play’n GO has produced in order to create a more captivating experience for players.

Described as ‘creating the next level of slot entertainment’, these series’ have given players, not just great gaming but, as well as creating first-class entertainment, they also invest in the intellectual properties of their stories. That means developing rich characters, stories and worlds that people connect with and immerse themselves in.

According to Play n Go popular series include The Rich Wilde Series, The Egyptian and Norse mythology series’, and the Leprechaun games. Each contains several games and characters that players have come to know and love. As a result, they have produced some of the supplier’s most successful and most recognisable games in today’s market, proving the value of this tactic.

This latest release, Ice Joker, sees the introduction of a brand new Joker character, Iceilia, who can use her icy powers to freeze the reels in a unique re-spins feature. It also features free spins and a thermometer charge, for when things get really cold!

According to CPO Martin Zettergren from Play n Go “Ice Joker is an excellent addition to, not just our portfolio, but also our joker series of games. It provides a new dimension to the series, but still provides it’s own unique entertainment. Our game families are not just about creating games; they’re also about creating legacies, and that’s what we’re doing here at Play’n GO. We will use the connection these series create to introduce players to new ideas and forms of entertainment, as well as creating new legacies for them to enjoy.”

Ice Joker is now available at all of the Play N Go powered online casinos to play for free or with real money.