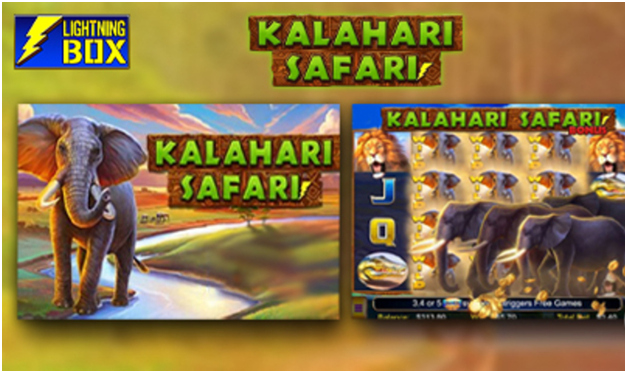 Lightning Box is a Sydney, Australia based casino game developer that supplies awesome slot games to casinos both real land casinos as well as to online casinos. Their popular online slot games include titles like Chilli Gold, Dolphin Gold, Frogs n Flies, and Lost Temple and others. Lightning Box has about 40 online games. In late 2017, the company inked a three-year deal with Microgaming Quickfire, giving over 200 casinos access to their unique content such as the highly popular Serengeti Lions, with three separate “Stellar” jackpots, up to 10 free games and 8x multipliers.

It recently added a new slot title to its catalogue of games known as  Kalahari Safari. This latest four-row video slot is themed around the colorful African savannah and comes complete with a mixture of indigenous animals and symbols spinning across its five reels.

Lightning Box Games stated that the mobile-friendly Kalahai Safari invites intrepid online casino aficionados to ‘hitch a ride across the African wilderness’ as they go in search of potentially-lucrative zebra, lion, and wild elephant icons. The pioneering developer pronounced that its latest 1,024 ways-to-win video slot moreover features an entertaining bonus round that could see players awarded with up to 20 free spins for getting a minimum of three scatter icons to ‘stampede over the reels’.

This new video slot is rolled out across sites run by the SG Digital subsidiary of iGaming behemoth Scientific Games Corporation.

The company was founded in 2004 by Peter Causley and David Little, two games mathematicians with over 40 years of experience between them. The company launched their first online game in 2010 on what was then known as Chartwell Technology, one of the first companies to deliver Java and Flash games online. Lightning Box games are now delivered in HTML5 for play on any device with any operating system.

Prior to launching the company, Little was the owner of Gameworks International in the Sydney area. The company did pioneering work on 5-reel slots that first began to appear en masse in 1999. Clients included NextGen, Novomatic, and Apex. The Novomatic slot, Beetle Mania, was a Gameworks creation. Prior to that, Little was Senior Game Designer at IGT and before then he held the same position at Olympic Video Gaming in Melbourne.

Causley began his gaming career at Aristocrat in 1993 and was responsible for among other things the “development, launch and global product rollout of the highly successful ‘Mr. Cashman’ range and acceptance of the Penny games in the USA”. His design and math-works were also behind the success of stepper games like Chicken, Golden Canaries, and Bumble Bugs.  At least with online slots every player can get a seat at a Lightning Box game.