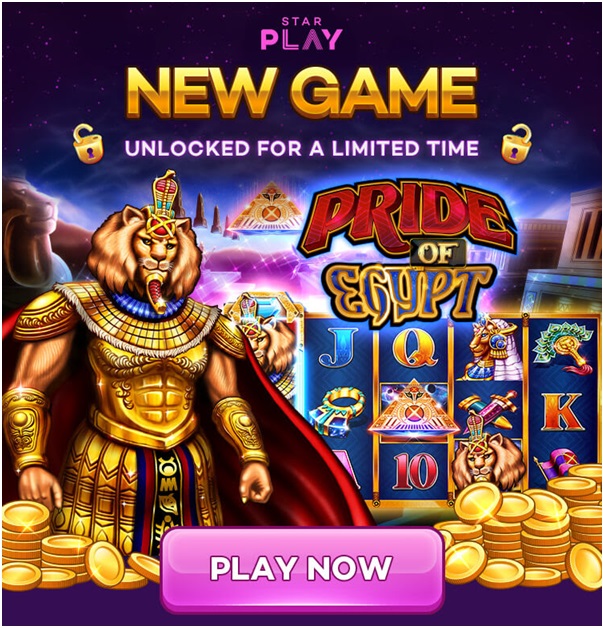 Pride of Egypt is a free-to-play online game with no real money online gaming supported that was recently added to the games lobby at Star Play online casino in Australia.  In this awesome slot game defeat the lions in the Pride of Egypt to gain access to their treasure. The game features Action Stacked Symbols and the copy and paste feature. This feature is triggered when the same symbol is at every position on reel 1. At least one of the remaining 4 reels will be selected and those symbols replaced by the same symbol appearing on reel 1. Hit three or more pyramid symbols to earn up 15 free games. This slot game is powered by Konami software.

In Pride of Egypt video slot you will find flags, daggers, rings and ornate fans over the five reels. The name of this slot machine comes from the lions who are the top paying symbols. Pride of Egypt has some interesting bonus features. Wild substitutions will boost the frequency of winning spins when the lion acts as other symbols to complete paylines, but it’s the chance to land free spins with multipliers, reels with matched symbols, stacked symbols and even a progressive jackpot that really attracts players to this game. Of course, the jackpot payout only happens when the perfect combination of symbols appears, but even the possibility of such a massive reward makes this a slot worth looking at.

Landing three, four, or five examples of the same symbol across payline from the left side will be enough to claim a prize. Other symbols are broadly split into two types. There are the traditional playing card icons, which will return the smaller prizes, and the higher-value picture symbols. The Pride of Egypt comes with the popular Action Stacked Symbols feature that’s seen across a number of slot machines from Konami. Before each spin, the game software randomly picks a symbol that will be stacked across any reel it lands on.

While this should make it easier for the chosen symbol to cross enough paylines for a win, if it lands on reel one, on the left side, it will be copied to other reels. That makes it even more likely that you will get a winning combination from this symbol and as it’s possible for two, three, four, or all five reels to be filled with it, you could be looking at a big payday.

The mysterious image of a pyramid is the scatter symbol. This golden icon, which has the eyes of a lion staring at you from the top, and a background of stars and planets, looks great and triggers a fantastic bonus round when it lands in three or more places at once.

The pyramids rotate in position, adding free spins with each turn, and while the basic feature has just 15 extra spins for you, it’s possible that they keep on turning and award a massive 600 extra games.

Before the free games begin, the screen changes to show a set of scales where you can choose to have the spins start immediately or take an instant coin win. If you choose the free games and then change your mind half way through, you can activate the Balance of Fortune at any time, which ends the spins and gives you a coin award based on how many were still left to play out.

Pride of Egypt video slots betting stake starts at just 0.01 per line for real cash prizes. It’s got 20, 30, or 40 paylines, depending on where you are playing this land-based slot machine online.

You can play this slot game at Star Play online Australia casino for free.