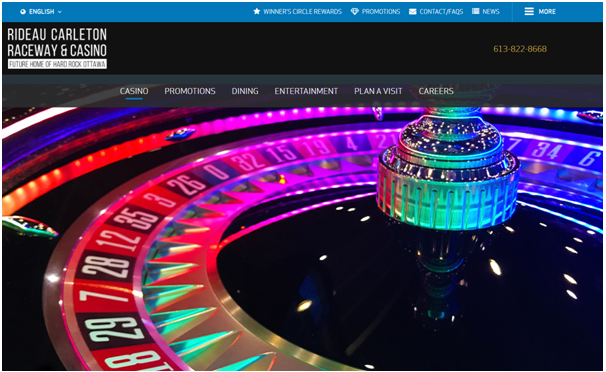 Lately this month the casino news focussed on Rideau Carleton Raceway as it has been approved to undergo construction of a full fledged casino in the Ottawa province. The Rideau Carleton Raceway will undergo a C$320 million expansion that includes a hotel, a music venue and 140,000 square feet of gaming space for slot machines and table games. Last fall, Hard Rock International took over Rideau Carleton Raceway and announced that it is to partner with the raceway, investing millions to create a premier integrated entertainment complex.

The Rideau Carleton Raceway has been in operation since 1998, but it had only slot machines. Following the acquisition of the raceway, Hard Rock International unveiled its ambitious plan to build a full-fledged casino resort and install gaming tables in the facility. In that way, Hard Rock Casino Ottawa is to end Casino du Lac-Leamy long-standing monopoly on the table games in Ottawa.

According to Ottawa CTV News table games were just added to the Rideau Carleton Raceway. It is expected that the competition between the two gambling facilities is to be fierce. The media spokesperson for the Casino Lac-Leamy, Catherine Schellenberg explained that the competition is actually a good thing. She added that Casino Lac-Leamy did not experience any economic slowdown or a drop in visitors. Ms. Schellenberg elaborated that there are enough casino gambling fans on both sides of the Ottawa River.

Striving to keep its share on the gambling market in Ottawa, Casino du Lac Leamy unveiled an ambitious renovation plan. The company behind the casino put a C$47.3 million price tag to that project, which aimed at rejuvenating the interior of the Gatineau casino.

Under the city’s zoning, the gambling operator is allowed to add 21 gaming tables and the number of slots is expected to increase slightly to 1,250. Last November, Hard Rock International applied to expand the allowed number of gaming tables from 21 to 35. The company filed its application with the committee of adjustment, a quasi-judicial body that deals with minor changes to zoning rules.

That vexed many officials, who claimed that Hard Rock tried to sneakily receive the approval, avoiding the Council approval. Responding to the verbal attacks, Hard Rock explained that the addition of 14 more gaming tables is a minor variance and that is the reason why the company filed its application with the quasi-judicial body. Eventually, the committee of adjustment panel gave the go-ahead to Hard Rock’s proposal to expand the number of gaming tables to 35.