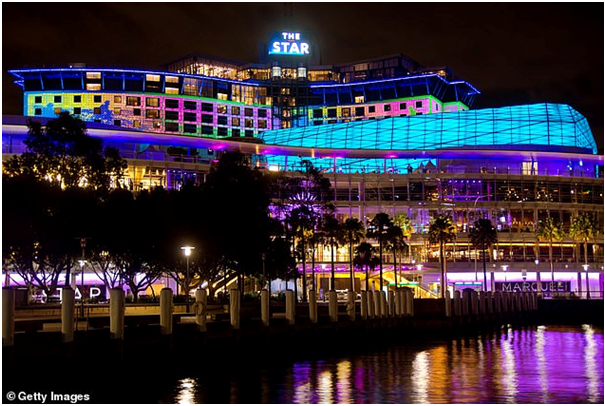 Recently the famous Star Casino Sydney upgraded its security measures after CCTV camera catches stealing croupier. The casino deploys now facial recognition technology as part of expensive security and surveillance as part of an ongoing A$10 million upgrade of the property’s security equipment.

The move game after a croupier at the casino was caught stealing a chip worth A$5,000 while on shift. A CCTV footage from the cameras right above the stealing croupier obtained by local media outlet the Daily Telegraph showed the casino staffer snatching one of the chips positioned at the table before him and casually slipping it into his sock.

In a subtle move, he pinches a chip with his pinky and ring finger, exposing it briefly to the cameras before stowing it in his palm.

He then looks at the ground, before reaching underneath the table for a few seconds and resurfacing. The dealer shows his open palm face-up to the camera – a move called ‘showing clean hands’, which is instilled on employees during training to prove they don’t have any chips in their hands. The dealer then shifts his now-empty hand across the table and towards the deck of cards on his left to continue the game as if the theft had not happened.

He was quickly caught by the casino’s security team, who monitor the thousands of cameras inside the complex. Security experts branded him the ‘Mr Bean of crooks’ for the botched theft, with The Star’s surveillance chief Catherine Clark saying he should have known better.

Suspicious behaviour like fidgeting or reaching underneath the table – both exhibited by the dealer in the footage – draws the attention of surveillance. The dealer was quickly caught and fired by the casino. He was prosecuted and given a suspended sentence.

The security beefed up at the casino

According to the Star’s surveillance chief Catherine Clark they already have 360 degree coverage of the property and without touching a camera they can follow someone wherever they go. A former casino dealer told Daily Mail Australia trainees were constantly reminded that cameras were watching their every move.

The Daily Telegraph news reported that new facial recognition cameras will be deployed in high risk areas across the casino floor in the coming months. The new technology will be able to match people’s faces to those held in a database of previous offenders.

As part of its security and surveillance upgrade, The Star Casino will also get new door alarms, infra-red night vision cameras, motion sensors, and ID scanners, among other things.

The Star’s surveillance chief Catherine Clark said, it will also be incorporated into their customer service where they can recognise customers and welcome them back personally, telling them their favourite drink is waiting at the bar.

Surveillance here is a 24 hour, seven day a week operation. On a Saturday night the Star casino has 150 people working in their surveillance and security teams. Ms. Clark further pointed out that she has probably got her best surveillance ideas from movies like Ocean’s Eleven.

About The Star Casino Sydney Australia

The Star Sydney is located in Pyrmont, Sydney and is only full-scale Las Vegas-style casino at present. Overlooking Darling Harbour, The Star features two gaming floors, eight bars, seven restaurants, 351 hotel rooms and 130 serviced and privately owned apartments. It also includes the 2,000 seat Sydney Lyric theatre and Event Centre. Its gaming operations are overseen and controlled by the New South Wales Casino Control Authority and is licensed to be the only legal casino in New South Wales.

Owned by Australian casino and hospitality operator The Star Entertainment Group, the property is the nation’s second largest casino after Crown Casino in Melbourne. The gaming and hospitality company has partnered Hong Kong-based multi-faceted investors Chow Tai Fook and Far East Consortium to invest more than A$500 million into the expansion of the existing complex and the addition of a new hotel and residences tower that will include new resort amenities, enhanced food and beverage options, and a neighborhood center, among other facilities.

The casino features two gaming floors — the main gaming floor on level one for general entry and the Sovereign Room on level three. The Sovereign Room table bet ranges from $25 to $75,000 and also contains the Inner Sanctum, with table bet ranges of $100 to $500,000. The two areas are only available to high rollers and international guests following an application for membership and review by The Star’s management. Recent rebuilding works have added extra gaming areas for the main gaming floor with the addition of the Oasis Lounge and the 36 Degrees Bar although these new areas have not increased the number of tables or machines available in total. The main gaming floor is divided into three major parts — Table Games, Electronic Gaming, and Poker. The number of poker tables has been steadily increased and now stands at 40 tables.

The Sovereign Room has been upgraded and now includes four additional private gaming rooms and extra dining and lounge amenities. These extensions have an estimated cost of $7,000,000. Another recent upgrade is the addition of a new “ultra exclusive” area directly above the Sovereign Room called the Vermilion Room. This is accessed by invitation only, and there are currently fewer than 100 Vermilion Card Members that are entitled to use the Vermilion Room. Star City has recently opened the sports bar as well.

The Star provides a selection of electronic gaming machines, including slot machines, bingo, rapid roulette and video poker machines. Rapid Big Wheel was introduced in early 2006 to replace the often slow-paced table game version, which has now been reintroduced, and the Rapid Big Wheel removed in August 2007. The Star has just over 1490 electronic gaming machines but is limited to a maximum 1500.

As in most casinos, the gaming floors of the venue are constantly monitored by a security camera system. Cameras mounted on the roof and in the table signs are used to ensure that all actions are logged. The footage can be used to settle player disputes, identify cheating, and be used in the Australian court system for prosecution.