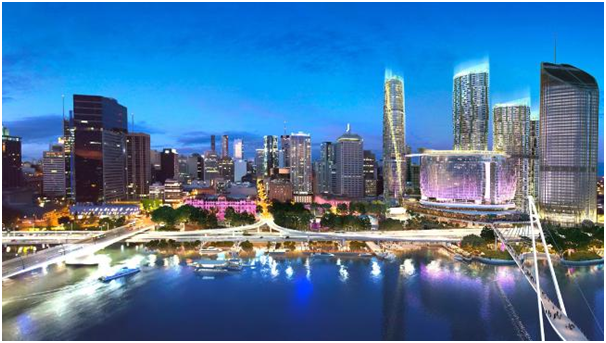 Following approval by Economic Development Queensland work on the new $3 billion Brisbane casino resort got underway on January 1. After reviewing plans for the integrated resort between George Street and William Street, Brisbane, all the necessary governing bodies signed off on the proposal last month in December.  The project which will be developed by the Destination Brisbane Consortium and led by Star Entertainment is now all clear from local council, the departments for transport, the environment and heritage.

The State Development Minister Anthony Lynham was in high spirits when holding a press conference to formally announce the start of project that will run for the next six years where the buildings will dramatically improve the area.

According to him every city has an iconic landmark that people look at, and one can imagine people visiting Brisbane, standing out there at South Bank looking at this magnificent structure from South Bank. With the streets now closed and demolition teams working to clear space for the new structures, thoughts will turn to the impact a new casino will have on region. Under the proposals, the Queen’s Wharf casino resort will feature 1,000 hotel rooms, 50 restaurants and new gaming facilities courtesy of the Star Entertainment Group. To make way for the new complex, Star will be converting its current Brisbane venue, Treasury Casino, into a Ritz Carlton.

Over 2500 pokies/slot machines will features at new casino

When the new casino opens its doors in 2022, it’s expected to offer 2,500+ gaming machines, an array of table games and poker. Additionally, the connected hotels which are five in total will boast six-star ratings. Despite insisting that the casino isn’t designed specifically for high rollers, there is a clear effort to bring more VIPs to the area. Indeed, despite a drop in VIP revenue over the last two years, analysts at Morgan Stanley predict an upturn by 2020.

Thanks to improved facilities and more Chinese travellers receiving visas, the number crunchers expect VIP revenue to increase by as much as 14 percent by 2020 for Star and its rival, Crown Resorts.

According to Lynham it’s an architectural gem, the way the skydeck comes around, and the thing he most like about it, as the minister, is there’s 12 football fields of public space.

When complex, the Queen’s Wharf development will become the jewel in Star’s proverbial crown and site alongside its existing properties, Star Sydney and Star Gold Coast. In addition to new casino facilities, the project will create 2,000 jobs during construction, 8,000 once the development is complete.