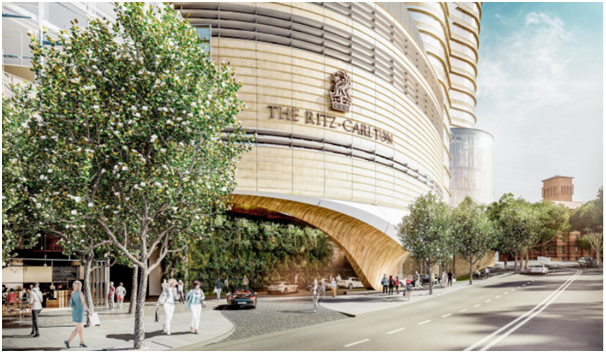 The  Star Sydney has made a $500 million bet on Australia’s tourism and lodging plans with the state government few days back for a new six-star hotel tower at its Pyrmont casino site.

With so many developments coming up at Sydney this news about the Star Entertainment Group  partnership with luxury hotel chain Ritz-Carlton to develop hotel and apartment complex near The Star’s existing casino in Sydney is a larger project for the renovation and expansion of the casino.

It is only the Star casino being in monopoly to operate in Sydney but this will end soon as the rival gaming operator Crown Resorts is building a A$2-plus-billion integrated resort with a casino floor in Barangaroo. The property is expected to open doors in the early 2020s, expanding Crown’s footprint to Sydney.

In a joint venture between The Star and Hong Kong-based conglomerate Chow Tai Fook will see the construction of a 61-story, six-star Ritz-Carlton hotel. It will adjoin The Star’s existing casino and will feature 220 hotel rooms and 200 apartments, a restaurant, a spa and wellness center, two gyms and a public restaurant.

Under the expansion project this will also include the addition of a pool area with views to the harbor, new food and beverage outlets, and a number of other amenities. The Star has said that it has no plans to expand the gaming area of the complex.

The new Ritz-Carlton hotel is designed by FJMT and will aim to compete with Crown Sydney’s planned six-star hotel. The new addition to The Star Sydney casino complex will mark the return of the Ritz-Carlton to Sydney. The luxury hotel chain operated two properties in the 1990s, but both closed doors and were rebranded as InterContinental Double Bay and Sir Stamford at Circular Quay.

Chinese players are the targets for The Star Sydney

The Star CEO Matt Bekier in the news commented that Sydney needed luxury hotels to meet the growing demand from international visitors, particularly from the rapidly growing Chinese middle class.

According to Mr. Bekier, Australia currently attracts just 1% of China’s outbound tourists, but this figure can improve if amenities that cater to that particular group are launched. Also, the country draws around 8.3 million international visits annually, but analysts believe that the visitation rate will nearly double to 15 million per annum in the next decade.

Australia’s casino industry is looking to bring back Chinese patrons after the 2016 arrests of Crown Resorts staff, including the company’s Head of International VIP Operations, in Mainland China that resulted in a massive withdrawal of that coveted group of players from Australian casinos. Both Crown and The Star suffered significant losses in the wake of the incident. However, the two companies seem to be developing strategies to bring back high rollers and to capitalize on a new group of customers – the rapidly expanding wealthy Chinese middle class, which has been traveling more and more and has been taking longer and longer trips around the region.

The local Pyrmont community had been engaged on the project, with a five-storey neighbourhood centre also part of the development. These facilities would include a social-enterprise café, reading room, function space, collaboration hub and rooftop terrace.

About 1000 construction jobs will be created, along with another 500 jobs once the hotel is operational. There are also plans for Ritz-Carlton hotels in Perth’s Elizabeth Quay and Melbourne’s Spencer Street. (input from various news sources)