The new Blown Away Slot launched by Lightning Box Games 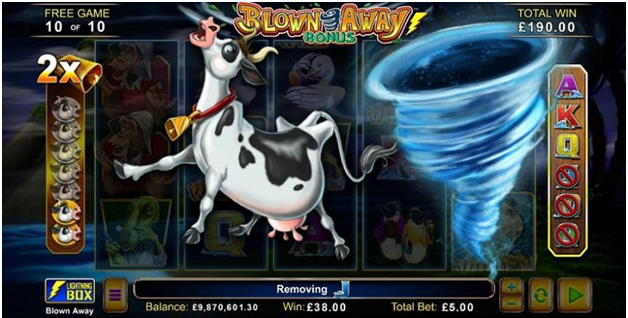 Recently Lightning Box Games, the third party online casino games developer launched a new slot called Blown Away. This is the latest five-reel and 25-payline game ‘is set aboard a fishing ship that has been thrown off course’ with players challenged to help its scurvy-ravaged crew ‘whip up several big wins in order to get them back on track.’ The Blown Away slot is compatible with both mobiles and desktops, and you can play it at even online casinos.

Blown Away is set on a tropical island, and although the golden sand, palm trees, and still waters would indicate that it’s set to be yet another beautiful day in paradise, the name of the game says otherwise.

As part of one of the game’s special features, tornadoes can appear on the reels, causing them to be blurred.

The playing card symbols are accompanied by miniature waves and yachts, and there are also images of walruses, gorillas, monkeys, lizards, birds, and penguins which can pay more generous amounts. The monkey is the most valuable symbol and a five-of-a-kind combo pays 10 times your total stake.

The Blown Away slot uses the Walrus for its regular wild symbol, and it can substitute for all of the other standard symbols in the game. There’s also a Tornado wild which is used as part of the special features.

The Thunder Cloud is the scatter symbol in the Blown Away slot game and it can only appear on reels 1, 3 and 5. Three scatters unlock the Free Spins Bonus.

The Blown Away slot game comes with two special features – the Free Spins Bonus and the Tornado Re-Spin Feature.

Each time that 3, 4 or 5 scatter symbols land anywhere in view on the same base game spin, you gain an instant reward of 5, 25 or 150 times your total bet respectively. Next, you receive ten free games.

During the Blown Away Free Spins bonus, if a Tornado symbol appears, all instances of the least-valuable royal card are removed from the reel set to make your remaining spins more valuable.

Plus, the Tornado symbol also increases the Cow Meter by one step which, in turn, increase the value of the win multiplier by up to x7.

The Tornado is a special wild symbol that can only appear on reel 5. Whenever it lands on this reel, in the base game, it activates the Tornado Re-Spin Feature. The first time that it hits, it takes any 9 symbols away before awarding a re-spin, and if another Tornado symbol appears, it removes any 10 symbols and so forth.

The winning and rewards

In the Free Spins Bonus of Blown Away, you have the opportunity to whip up a storm of wins with multipliers of up to x7. Triggering the bonus game also rewards you with up to 150 times your total stake.

Like many other Lightning Box Games titles, the Blown Away slot uses particularly innovative features to make your heart race with excitement each time that you play it. Plus, in the Free Spins Bonus, there’s the potential to land over 904 times your total bet with each spin.

Sydney-headquartered Lightning Box Games stated that Blown Away moreover comes complete with ‘maritime music’ as well as a tornado re-spin feature that involves a virtual gust of wind removing the lowest royal symbol before awarding another spin. The online casino games firm explained that this can continue until there are no royal icons left on the reels with video slot aficionados also able to increase their chances of taking home a lucrative prize by using the walrus wild symbol.

The developer announced that the mobile-friendly title features a ‘hilarious’ cow-themed multiplier symbol that can ‘add to the fun and thrills of the game. As well as an extra spins bonus round where ‘royals remain removed for the duration of the spins.