There might be gambling inside Las Vegas Raiders Stadium in 2020 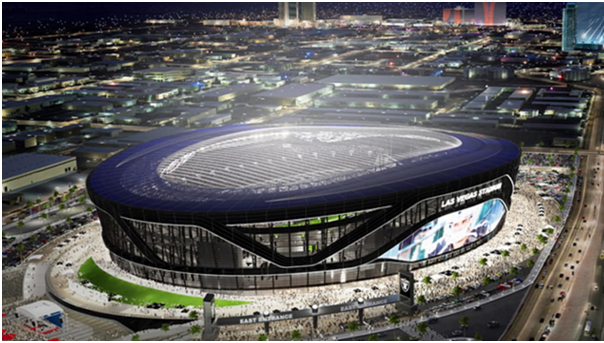 The Nevada Gaming Control Board (NGCB) is to decide whether to recommend that certain forms of gambling be permitted inside the forthcoming $1.8 billion Las Vegas Raiders stadium when it opens in 2020. This stadium is 65,000-seat domed football venue whichis being built near I-15 between Russell Road and Hacienda Avenue near the Strip.

This might be a major change to the earlier law when Senate Bill 1, the Southern Nevada Tourism Improvements Act, came into effect in October 2016, where the legislation mandated that no gambling activities would take place on the stadium grounds..

Since the bill was enacted, the Supreme Court of the United States repealed the longstanding federal prohibition on sports betting. The decision gave states the power to determine their own rules and regulations on the gambling activity.

According to Nevada Gaming Control Board which is more of a sports betting appetite nationwide, it will consider recommending the stadium bill be amended to permit certain gambling.

They said in a news report that should proposals be brought forward with regard to gambling in the stadium, they will assess them on their merits. Senate Bill 1 allocated up to $750 million in state money generated by a small increase in the Clark County hotel occupancy tax for the Las Vegas Raiders stadium.

Caesars Entertainment to be the first founding partner

The Raiders won’t relocate from Oakland to Las Vegas until the start of the 2020 NFL season, but that isn’t stopping Caesars Entertainment from becoming the stadium’s “first founding partner.” The partnership will give the casino operator a “commanding presence in the stadium, its own branded drop off zone, private suite for its best customers and loyalty members, and various exclusive privileges to events and happenings.

With one of the country’s largest gaming operators prominently displayed throughout the football stadium, it raises the question whether actual gambling will be permitted inside the venue.

There are major questions which might also be sought for such as allowing the punters to bet on the game from their seats via mobile apps or be able to sit down at slot machines on the concourse.

Laws now to be changed

In addition to regulating casino licenses, the Nevada gaming control board is tasked with making recommendations to the Nevada Gaming Commission on regulatory changes where it seems to be necesssary. The Commission is the final authority on licensing, and holds the responsibility of adopting regulations proposed by the Gaming Control Board.

Also the Las Vegas Stadium Authority could request the Nevada gaming board to  recommend the Gaming Commission that slot machines and perhaps other forms of gambling be permitted.

Nevada residents are certainly accustomed to having slots and video poker terminals at their disposal. One can find slots and video machine game terminals at the McCarran International Airport and also at various businesses across the state including gas stations and grocery stores so that gamers get easy access to games and have fun.