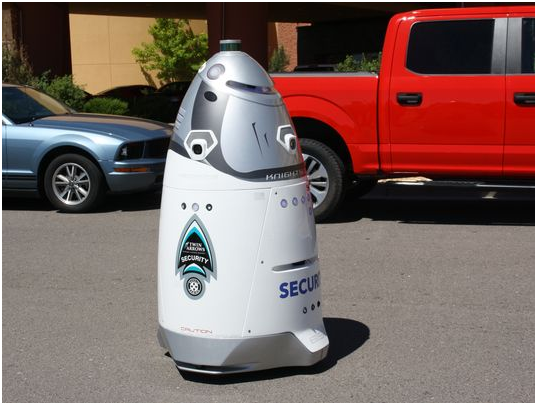 Las Vegas Casinos already have introduced robo live dealers at their table games and now even the security staff is going to be a robotic machinery working full time as a security officer. This is seen now at an Arizona casino.

The robot officially began its 24/7 shift on June 29 at the Twin Arrows Navajo Casino Resort, which is located along I-40/Route 66 some 25 miles east of downtown Flagstaff. Since he is on roll the Twin Arrows parking lot is being better secured thanks to an autonomous data machine patrolling the Arizona casino property.

The 398-pound robot stands 5′ 2″ tall and can travel at speeds up to three miles per hour. The device will monitor the outside area of the casino resort.

The robot has been developed by Knightscope, a Mountain View, California, company which boosts that the company is dedicated to “predict and prevent crime utilizing autonomous robots, analytics, and engagement.”

The robot, named K5 by Knightscope, can scan 300 license plates per minute, and in addition to identifying stolen vehicles, can instantly create a list of vehicle owners who have been charged with crimes such as trespassing and domestic abuse.

According to Twin Arrows Security Director Joe Gustafson “I think this will be a big help and we’re going to get so much information from this also everyone seems very receptive and excited.”

The Pechanga Resort Casino in Temecula, California, was the first casino in the US to employ the K5 device.

Robocop can even detect criminal mindset

In addition to surveilling cars, the Arizona casino robot’s physical presence, according to Knightscope, will scare off those who might have illicit thoughts or plans.

If a marked law enforcement vehicle were placed in front of your facility, criminal behavior would dramatically change,” Knightscope states on its website. “ADMs (autonomous data machines) have the same impact.”

The company says the machine has a “commanding physical presence,” despite the fact that it stands at just 62.5″. The United States Department of Health and Human Services says the average height of a woman in the US is 5′ 4″, while men on average are 5′ 9″.

Thus  it’s not only the height of the ADM but also its monitoring that might turn away an otherwise would-be criminal. The robot moves freely on its own accord, and has alarms to signal when it’s being damaged by an outside force. If stolen, K5 locks its data.

Casino resorts across the country remain on edge less than a year after a madman set up a firing perch inside Las Vegas Mandalay Bay and carried out the deadliest mass shooting in modern US history. Security is of utmost concern, and continued shortcomings emerge in property surveillance.

Also few days ago a man with a stolen box truck was freely granted access to 11 Las Vegas casinos where he entered through loading docks and stole various furniture and even a photobooth.

Armed with nothing more than a lanyard and clipboard, the alleged criminal convinced loading dock security he was there to pick up certain items. The thefts took place at casinos most would think would be highly secure including Caesars Palace, Rio, and Westgate.

The reported looter was only caught after a Metro Police officer tried to pull him over for an unknown reason and the man fled. The robotic security device perhaps could have identified that the box truck was stolen, and alerted law enforcement that the vehicle was at the casinos.

You can visit casino at 22181 Resort Boulevard Flagstaff, Arizona 86004