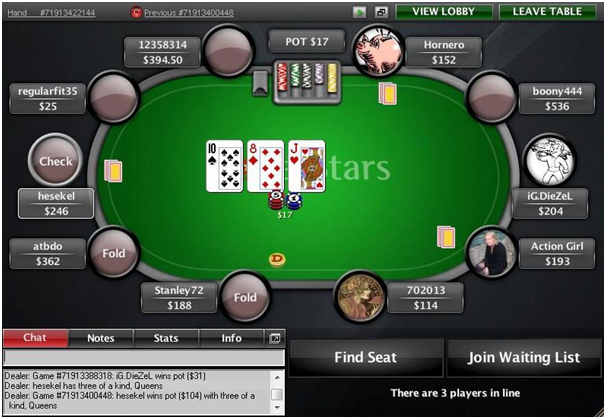 World’s biggest online poker room well known as PokerStars is now all set to make its debut in Pennsylvania. In the news recently it was known that Poker Stars is partnering with the Mount Airy Casino Resort in the Pocono Mountains to enter the US’ fifth most populated state. Mount Airy’s partnership with The Stars Group, parent company to PokerStars, is also for online gambling and sports betting.

Earlier known as known as Amaya, the Canadian interactive gaming company will bring its PokerStars Casino and BetStars sports wagering platforms to the this US State where players will be able to access the platforms with one account.

According to Mount Airy VP of Marketing Vincent Jordan said thatentering online gambling and sports betting “is the obvious next step” for the resort. Only those located within Pennsylvania will initially be able to sit at the interactive tables and digital slot machines.

Note that Pennsylvania is the second legalized onlinegaming jurisdiction where PokerStars has returned, the other being New Jersey. Earlier poker stars had to leave the country in 2011 in what became known as poker’s Black Friday.

Also it has come up that Poker stars has announced that it would build its satellite casino in Beaver County about 30 miles northwest of Pittsburgh. The so-called “mini-casino” will offer 750 slot machines and 30 table games.

According to the Pennsylvania Gaming Control Board (PGCB) nine of the state’s 13 licensed commercial casino operators have applied for online gambling permits at a cost of $10 million each.

The fee allows the operators to offeronline slots, tables, and poker. Gross gambling revenue (GGR) from online slots will be taxed at an effective rate of 54 percent, and table games and poker rake at 16 percent.

The Tax Revenue much less than expected.

The Three US states offered online poker legally was not generating much revenue. Tax revenue generated by WSOP.com in Nevada became so less that the state stopped reporting it separately from live table games. Delaware’s online poker rooms typically generate less than $20,000 a month in rake and fee, and New Jersey online poker GGR is down 11.5 percent through June 2018.

But now as Pennsylvania, a state with 12.8 million people, equal to that of Nevada, New Jersey, and Delaware combined, joins the game online players and PokerStars will hope state regulators will approve of pooling Pennsylvania’s online traffic with the three other states, which already do so through an interstate compact.

With this partnership deal with Mount Airy and Stars group, makes it the fourth Pennsylvania casino to form a partnership with a sports betting supplier. Philadelphia’s SugarHouse and Pittsburgh’s Rivers casinos both entered into a software partnership with Kambi, while Parx, also near Philly, is going with GAN.

While the four casinos have announced sports betting arrangements, the PGCB says none have actually applied for permits. Casino operators are lobbying state lawmakers in Harrisburg to reconsider the sports betting tax and reduce it to fall in line with other jurisdictions.

In December 2013, the Pennsylvania State Senate passed SR 273, a resolution that called for a study of future viability of online gambling in Pennsylvania. The Legislative Budget and Finance Committee (LBFC) was commissioned with conducting the study and they released their findings on May 7, 2014.
According to the 206-page report, iGaming could produce over $307 million annually in revenue with $113 million going to the state in the form of taxes. Online poker in Pennsylvania could generate up to $129 million in revenue while online casino games could generate up to $178 million in additional income.

Attempts by lawmakers were made in both 2014 and 2015 to pass iGaming legislation but both attempts failed to come to a vote.  The tide began to turn in favor of iGaming legalization in 2016 when iGaming was added to the state budget.

In July 2016, a $1.3 billion budget was approved by Gov. Tom Wolf that included a $100 million earmark from online gambling reform. Despite being a part of the budget, attempts to pass iGaming legislation still fell short of full passage.

With a new budget plan that was passed by the House earmarked $200 million from Pennsylvania online poker and online gambling expansion, up from $100 million a year earlier. This new budget plan revived efforts to pass H 271 and on October 25, 2017, the Senate passed an amended version of the bill 31-19.
The next day, the Pennsylvania House also passed H 271 by a margin of 109-72. This allowed the bill to move on to Gov. Tom Wolf’s for his signature. On October 30, 2017, Gov. Wolf signed the bill to make Pennsylvania the fourth US state to regulate online poker and iGaming. (with inputs from various news sources)