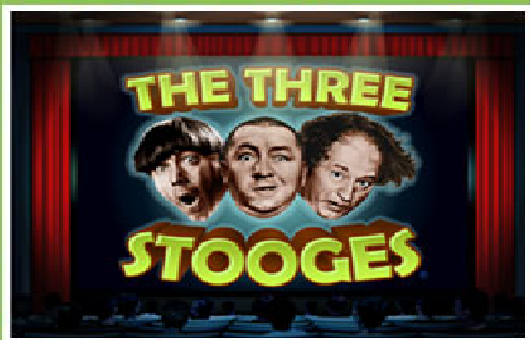 Play The Three Stooges II for real with any of the following sites:

You will get enough winning opportunities in this game as there are three different and innovative bonus features round in this game. The first one is the Curly’s Cashola feature that triggers when three Curly symbols appear on any active payline and offers 9 free spins with doubled payouts.

The second feature is named as the Larry’s Stash feature and it is triggered when three Larry’s symbol appear on a payline. During the feature players will have to participate in 6 level bonus round. All levels have different payouts and players can win up to 20 free spins with up to 7x payout. The third feature is the Moe’s Moolah bonus feature that triggers when three Moe symbols appear on any payline. During this feature players can win up to a massive 100 free spins with up to 10x multiplier. During all these three features any mixed Larry, Curly or Moe on a payline will award 1 more free game.

Apart from these three exciting bonus features there are three randomly triggered progressive jackpot feature also attached with this slot. They are named as the Minor Random, Three Stooges Jackpot and Major Random.

The Three Stooges II pokies has more than 18 winning combinations with different winning symbols. The coin size varies from $0.01 to $5.00 and the maximum bet per spin is 15 coins.