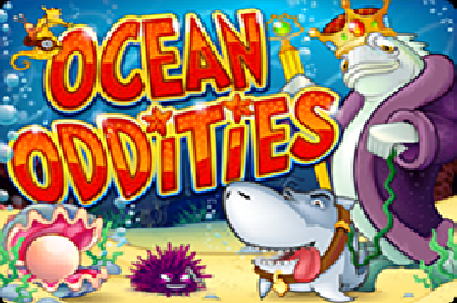 Play Ocean Oddities for real with any of the following sites:

As the name suggests this pokies game has all the action in the depths of the ocean where you will encounter some peculiar underwater creatures such as shark acting as a dog, codfish king, crab with ‘No Trespassing’ sign, snail riding a seahorse, scary-looking sea urchin, pearl and fish acting as a pilot. All you have to do is select the number of paylines to be active, which can be anywhere from 1 to 25, and choose coin value from $0.01 to $5.

Spin or auto play start the game, while pressing speed will increase/decrease the speed with which the reels are spinning. Tap settings and then help to access the paytable.

Shark named Rex acts as a substitute, replacing all other game icons with the exception of Scatter to complete winning combinations. Wild symbol only occurs on reels 2, 3, 4 and 5. Meanwhile, Scatter is represented by Pearl, with this particular icon awarding Scatter Pays as well as used to trigger the game’s only bonus round.

Maximum coin jackpot in the main game stands at 2,500 coins and is paid out when five codfish king symbols are positioned on an active payline, but in case four Wilds appear in said combination during the Free Spins feature, the total payout will increase to stunning 40,000 credits.

Ocean Oddities is linked to two progressive jackpots – Major and Minor, both of which can strike completely at random and are triggered quite frequently.

Three or more Pearl Scatters positioned anywhere on the game screen unlock the Free Spins round where ten free games are played. This may not seem like much, but bear in mind that each Rex Wild appearing on the reels carry a x2 multiplier, meaning that a win with four Wilds will multiply your payout by x16.