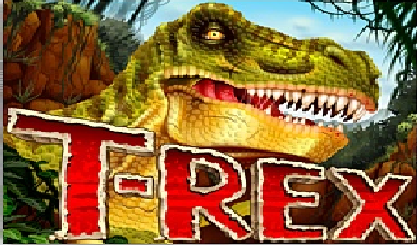 Play T-Rex for real with any of the following sites:

T- Rex is a 5 reels offering 25 paylines pokies game which will take you to a prehistoric voyage. T-Rex stands for the Tyrannosaurus Rex, the biggest and most fearsome of all dinosaurs that ever roamed the earth, you will encounter such symbols on the reels as the Dino Egg, the Volcano, and a variety of prehistoric plant and dinosaur species from Stegosaurus to the dangerous Tyrannosaurus Rex. The playing cards have also been creatively crafted to fit the prehistoric theme.

T-Rex on the reels is the wild symbol and substitutes all other symbols on the reels, apart from scatter (Dino Eggs) to complete paying combinations. Your wins will be doubled whenever the T-Rex substitutes a symbol to form a winning combo. Unfortunately, T-Rex will only appear on reel 3. Five Dino Egg scatters will award a top multiplier value worth 200X your bet, as well as trigger the free spins feature.

The T-Rex progressive jackpot can be triggered randomly after any spin, regardless of bet size. When you land at least 3 Dino Eggs scattered on the reels you start your wins. These will also turn into a pick me style where you will be given the opportunity to select a Dino Egg, which will award up to 10 free spins and initiate the Free Games Feature. During free spins, land the T-Rex symbols on the reels, and he will eat all other Dinosaurs which will then be replaced with T-Rex symbols and resulting winning combinations paid. This feature can be re-triggered.