Will the new hotel in Star Sydney attract Chinese tourists and high rollers for pokies? 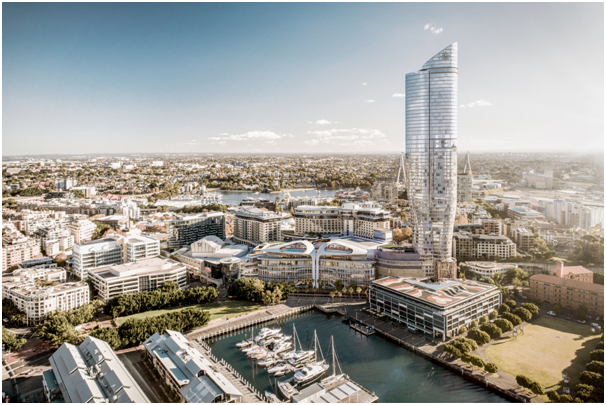 The Star Sydney is hoping to attract Chinese tourists to a $500 million hotel and residential tower at its Sydney casino site in Pyrmont. The development is proposed to include residential apartments and a luxury Ritz Carlton Hotel. The tower is expected to be 237 metres tall and feature library and function spaces. It also promises public transport upgrades and a renovation to the Star casino itself, which has irked many.

Concerns about this new development

Locals are angered by the proposal, with many unsure as to why people would seek residential accommodation in a building associated with the casino itself.

There are concerns about the height, floor space and zoning restrictions of the tower, with Alex Greenwich, the independent member for Sydney remarking that the tower is ‘inappropriate and destruction’. It is also set to increase traffic congestion and cause reflective glare. The Independent Planning Commission will consider the Star’s proposal, with more than 25 submissions receives that oppose the tower received by the Department of Planning and Environment.

According to the Star there is the need for high-end hotels to cater for increased tourist number as China’s middle-class demographic rapidly increases.

According to gaming analyst, China’s slowing economic growth could cause a collapse in the number of Asian high-rollers coming to gamble heavily at Australian casinos are being “overplayed”.

Shares in casinos in the gambling hub of Macau have tumbled nearly 15 per cent in recent weeks after a pullback in spending by high-rollers, partly due to China’s softening economy and uncertainty over worsening China-US trade tensions.

The Star, SkyCity and James Packer’s Crown Resorts have been monitoring the situation in Macau and bracing for the possibility of a reduction in volumes from big-spending Chinese visitors, a revenue source on which they have become increasingly reliant.

New research by analysts from investment bank Morgan Stanley suggests that concerns over China’s economy and the liquidity of junket operators who promote high-roller casino programs are “valid”. But recent industry discussions have led them to believe current trading remains “solid” for foreign VIP programs in Australia.

According to equity analyst Monique Rooney “Our recent industry feedback has allayed some of these concerns, with Chinese hotel/leisure companies reporting minimal impact on current trends and ample junket liquidity after recent consolidation,” Further feedback suggests that overseas VIP market growth remains very strong relative to Macau  particularly in the Philippines and Cambodia.

Foreign high-roller volumes have rebounded at Australian casinos, following a steep deterioration in 2016-17, when the Chinese government embarked on an anti-gambling crackdown and jailed 19 serving and former Crown Resorts staff for illegal marketing activities on the Chinese mainland

Crown, Australia’s largest casino operator, revealed turnover from its VIP programs had risen nearly 55 per cent to more than $51 billion in the latest financial year after being cut in half the year before. The Star turned over more than $61 billion in VIP programs in the period, an increase of more than 54 per cent.

The Star is currently the second largest Casino in Australia after Melbourne’s Crown Casino and opened in 1995. It features two gaming floors, eight bars, seven restaurant, 351 hotel rooms and 130 serviced and privately owned apartments. (with input from various news sources)